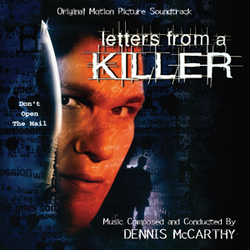 Letters From A Killer

For Letters from a Killer, Dennis McCarthy wrote music with an Americana flavor, very different from the kind of music he was known for writing at the time for the Star Trek franchise. Letters from a Killer provided Dennis with an opportunity to do something different, a score with a bluegrass flavor that would also allow Dennis to switch gears and write atonal music for some of the darker moments in the film, similar to something Ry Cooder or W.G. Snuffy Walden might compose. Also included on the album is a suite of film noir themed music Dennis composed for a student film.

BUYSOUNDTRAX Records presents Letters from a Killer, featuring music composed and conducted by Dennis McCarthy. This is a limited edition release of 1000 units.