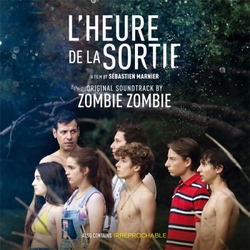 For Irréprochable, yet intriguing and definitely off-the-wall, Sebastien Marnier's debut feature stars French actress Marina Foďs as a femme fatale returning to her hometown in the hopes of landing a job as a real estate broker. For this captivating psychological thriller, Zombie Zombie composed an electronic score filled with nods to John Carpenter and Dario Argento, underscoring the movie's artsy B-grade origins.