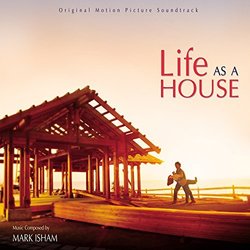 Life as a House

Review: Life As A House

Before Hayden Christensen was the Dark Lord of the Sith, he was a troubled teen who had fallen out of touch with his father, played by Kevin Kline, in Life as a House.  This 2001 film, also starring Kristen Scott Thomas, was regarded as sentimental and schmaltzy by some, but your reviewer happened to enjoy it.  True, Kevin Kline died slowly over two hours while his family re-discovered their love for each other, but at least Bette Midler and Barbara Hershey were nowhere to be seen.

Mark Isham, who doesn't get as much public credit as Mr. Williams and Mr. Horner, has nevertheless had an expansive career.  Scoring over eighty films, ranging from Blade to A River Runs Through It (for which he received an Academy Award nomination), Isham has demonstrated both his flexibility and his virtuosity.  His work for Life as a House does not disappoint.

Isham composed a thematic whole for the film that is affecting without being sentimental (no easy task).  The score is consistent.  There are almost no portions where you need to crank up the volume knob to see if the CD has stopped playing.  Rather, start-to-finish, the music is present, and with few exceptions, it is strong.  I don't skip a single track when I listen to this one.  Isham begins well by laying a firm foundation for some of his later themes ("If I Could Kiss You"), and he builds from there.  In "Tear It Down", Isham creates a tender passage that is used repeatedly throughout the remainder of the score.  He prudently does not let the track rest on its laurels, but pushes it as it advances, forcing the energy of the track from the potential to the kinetic – but like the maestro he is, Isham never lets his creation escape his control.  These themes repeat to satisfying effect ("Love Is Not Enough", "I'm Happy Today", "Build This House With Me") and are occasionally given a darker tinge when the mood calls for it ("A Promise").  The score is not one unbroken theme, however, as Isham occasionally tosses in brief but welcome respites ("A Leap") that capably provide levity while not upsetting the rhythm of the album.

Some of the work here could be compared to what Thomas Newman has done in the past.  Considering that there are many comparisons to be made between Life as a House and American Beauty (which Newman scored), whether this is coincidence is up to you to decide.  What I was most reminded of, however, was Newman's work on How to Make an American Quilt.  This, ladies and gentleman, is not a bad thing.  So if you are looking for a cozy piece of music to snuggle up with on a rainy afternoon, Isham's Life as a House is a choice that should provide more warmth than a fresh bowl of chicken noodle soup, and it's every bit as satisfying.