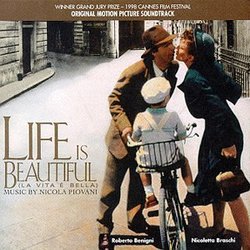 In Life is Beautiful, director/actor Roberto Benigni paints a different perspective on the Holocaust. Benigni plays Guido - an Italian Jew who is very outgoing and spontaneous. The first half of the film takes place in 1939 when Guido is courting Dora (played by Nicoletta Braschi). The second half takes place a few years later, when Guido and his family is sent to a concentration camp - and makes it appear as if the whole thing is a game to his young son.

Composer Nicola Piovani provides an appropriately simple score for the film. With two musical themes, the score feels very light and unobtrusive - there is no heavy underscore. In fact, there seems to be very little underscore through the film - most of the music seems to involve variations of the themes, with some scoring to "fit the scenes" when the occasion arises.

The scoring itself is very classical in form, utilizing (what sounds like) a small ensemble orchestra for most of the score. A few tracks ("Grand Hotel Valse", "Grand Hotel Fox") consist of dance music, as would befit the scenes for which they appear. Since most of the score involves the light themes, the few tracks which don't contain those themes (and primarily consist of underscore) definitely add some dimension to this soundtrack.

The album for Life is Beautiful is a mixed bag at best. The film has two wonderful (and beautiful) themes, but they are used over and over again - almost to the point of redundancy - and in different variations. There are the original versions, the military versions, the soft romantic versions, the dark foreboding versions, and so on. The music works well in the film, but as a listening experience it leaves a little something to be desired. I would recommend this album if you found the music to be moving enough that you can look past the repetitiveness of it. If you just enjoyed the theme, I would suggest waiting until it appears as part of a compilation album.