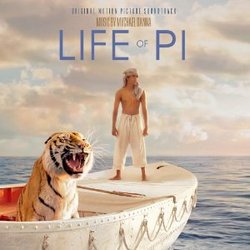 Adapted from the Yann Martel novel and directed by Ang Lee, Life of Pi tells the story of Piscine Molitor "Pi" Patel, an Indian boy from Pondicherry who explores issues of spirituality and growth through adversity. For 227 days after a shipwreck, Pi is left stranded on a lifeboat in the Pacific Ocean with a Bengal tiger named Richard Parker.

Mycheal Danna's score is simply sublime. His musical and thematic craft, specifically in this score, is truly a masterpiece. In a film as diverse as this, it was captivating to hear such a wide range of musical color. His musical 'painting' of culture, religion, and transcendence is only elevated by the deluge of ethnic technique and instrumentation. On the surface, this score appeals to a large range of listeners, offering strong tonal structures, hints of cultural exposure, and memorable melodic gestures. But it is far more than that. Through analysis of this score, I have found deep connections weaving though the film's core subjects and the musical themes with which they are partnered. The score is equally as introspective as the film, portraying topics of death, coming of age, religion, and culture in a way that allows the music to take a reflective journey similar to Pi's.

At the beginning of the film we are introduced to an amazing opening credit sequence where the song, "Pi's Lullaby" is played. Sprinkled with various ethnic instruments and percussion, the orchestra provides the backbone to a beautiful harmonic progression accompanying a vocal performance by famed Indian performer Bombay Jayashri. Co-written by Danna and the singer, the song is a beautiful mix of American and Indian styles. The lullaby is the melodic heart to the film and Pi. Although the melodic contour accompanying the song's verses does not occur during the film, the melodic contour of the chorus ('Pi's Theme') is frequently represented throughout the film. In the first segment of the film (before the family embarks on the Tsimtsum) many of the tracks are brimming with 'Pi's Theme' in unique ways to the atmosphere of the story. In tracks such as, "Piscine Molitor Patel," "Pondicherry," "Meeting Krishna," and "Christ In The Mountains," 'Pi's Theme' is heard steadily throughout being featured on various world instruments such as: bansuri, sitar, Indonesian and French specialty instruments offering a gamelan and accordion, the Persian ney flute, and heaps of percussion native to the specific regions.

Aside from the strong melodic 'Pi Theme' there are many other motifs and miniature melodies which help characterize events and people. One of those is 'Richard Parker's Theme.' First introduced in the track "Richard Parker," this four note motif is heard very subtly throughout Pi and Parker's experiences. This motif is great because it demonstrates a large 'storybook-end' form, meaning that the first time the theme is played we are introduced to Richard Parker and the last time you hear it is the last time you see him (at the end of the film). This theme can also be heard in the latter half of "Tiger Training," "First Night, First Day," and "Which Story Do You Prefer."

Another theme, similar to 'Pi's Theme' is the 'Child Theme,' which are similar in the sense that both themes embody an Indian sound with strong use of ethnic instruments and unique dance like rhythms. The 'Child Theme' is introduced early in the film, most prevalent in the track "Piscine Molitor Patel," when Pi is reciting the entirety of pi (the number). The theme also has a strong presence in tracks like "Set Your House In Order" and "Skinny Vegetarian Boy." In both of those tracks, Pi is setting up the rafts and creating ways to make living on the ocean more habitable. This childlike aspect of the theme clearly represents the imagination and instinctive qualities people have to find new ways to overcome obstacles and create solutions to the problems they face.

One of the most beautiful and mesmerizing themes in the score is the 'Love Theme.' This motif, often set in a pattern of three descending notes repeated twice, conveys raw emotion toward religious gods and to family. In the track "Tsimtsum," the audience can hear the 'Love Theme' performed by choir and orchestra. With the use of large sweeping chords, Danna created a mournful yet beautiful scene inflicting the audience with the exact emotions Pi was experiencing. Motifs or melodies like this are simply the best. Not only does the music itself breathe, but it allows the listener to feel the push and pull of tension which Pi feels at any point in the film when heard.

In the back half of the film Pi and Parker encounter a very large storm at sea; offering Danna the only true action sequence of the film. The music in the track "God Storm" provides a more frantic tone to the previous material. Fleeting string runs and the divergence between the deep male voices and solo boy voice create a haunted, self-realization within Pi. The tensions in the minor (key) variations of the melodies/motifs produce such force which depict the large waves and the power of the storm (or God) wonderfully.

The last three tracks "Back To The World," "The Second Story," and "Which Story Do You Prefer" are the most delicate and well-crafted moments of music in the score. The incidental composition Danna exhibits is outstanding and is a true display of skill. Danna manages to fill these soft moments with melodic motifs which makes the music more than just chords underscoring a sad dialog. The music seems more a dialogue with the film, helping provide emotion and flashback material to the story Pi is retelling in the hospital.

Overall, this score is an amazing work of art. It exudes film music's true potential. Danna was able to create a musical world which this movie clearly lives in and that is the main goal of any great movie score. On the whole, the score offers so much that a single listening could not suffice. The intricacies and orchestral precision is stunning and I commend Mycheal Danna for a truly transfiguring score.