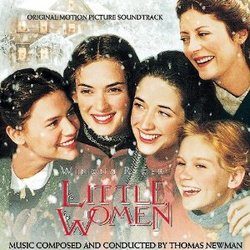 Thomas Newman received two Oscar nominations for scores that he composerd in 1994. One was for The Shawshank Redemption, while the other was for Little Women. While both compositions are from the same person, they couldn't be more different.

Little Women is a prime example of Thomas Newman's lighter works. It is very wintry, crystal-like, and exhilarating. Where The Shawshank Redemption was dark and dreary, Little Women is light and joyous. "Orchard House (Main Title)" is a perfect beginning to this tale set in winter. It introduces many of the themes that are found in the rest of the album. It is grand, bold and debonair, while at the same time being very meek and soft. Newman used The London Symphony Orchestra for this album, and they couldn't sound better. The horns are so exuberant and bold, while the chimes and mallets give the score its snowy, winter-like feel.

Unlike The Shawshank Redemption, there are no violent or dark cues on this album. This score fills in the gaps that Shawshank left empty. One track that is exceptionally sad is "Valley Of The Shadow" in which one of characters dies. Newman's approach to this is of extreme reverence and respect. The full orchestra plays in the very beginning, and then a lone piano plays, along with a light choir, a very powerful piece of music. This is one of the highlights of the CD, as well as some of the other cues such as "Snowplay," "Lovelornity," and "Under the Umbrella (End Title)."

This album proves that Thomas Newman can be an extremely versatile composer. In 1994, he was able to compose scores to over five films, including The War, Corrina, Corrina, and The Favor. Out of all of these, Little Women is Newman's lightest, and most wintry score. It is a joy to listen to, and I hope that he chooses to do more projects like this.