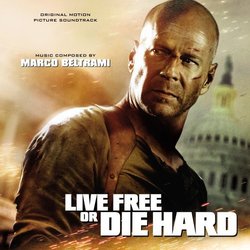 Of this summer\'s bounty of sequels, the most audacious may have been Live Free or Die Hard, the movie with which Bruce Willis and director Len Wiseman returned the Die Hard franchise to the big screen after a twelve-year absence. To score the film, the filmmakers tapped Marco Beltrami, who has established himself as a go-to composer for sequels to, and remakes of, films whose scores he did not write. Having succeeded the composers of The Crow, Blade, XXX, Underworld, The Omen, most recently 3:10 to Yuma,and most notably, The Terminator, Beltrami has written a Die Hard score that is both a reminder of, and departure from, the three composed by the late Michael Kamen. The only question is whether Beltrami\'s music should leave fans cheering "Yippee-kai-yay," or muttering "motherfucker…"

Fans can weigh the evidence as released by Varese Sarabande on a one-hour score album. Beltrami ensures that his predecessor remains part of the franchise by incorporating the (uncredited) main theme Kamen traced through Die Hard (1988), Die Hard 2 (1990), and Die Hard with a Vengeance (1995). The theme is heard often enough that its inclusion is no mere cameo; it is a certified homage. Sadly though, the score\'s most pointed use of Kamen\'s theme is a main title cue not included on the album.

To Beltrami\'s credit, he also utilizes some of Kamen\'s more minor motifs. In fact, the attentive ear—or is it simply the geeky one?—will pick up one of these motifs in the first ten seconds of the first track, even before he reintroduces us to the main theme. (The album\'s cues are not arranged in film order.) This should please fans who still feel that Kamen passed to soon. Unfortunately, the album\'s packaging should not. Despite the abundance of material Beltrami inherited from one of the action genre\'s most prolific composers, Kamen\'s name does not appear as a credit or dedication, in an acknowledgment of, or even a special thanks to.

Beltrami\'s deference to Kamen makes the score to Live Free or Die Hard one that is somehow filled with subtlety but lacking in nuance. While fans will enjoy hearing where Beltrami has weaved Kamen\'s work into and out of Beltrami\'s own, the score is also classically generic in the manner of so many contemporary action scores. No more themes, no more melodies. Other than the material written nearly twenty years ago, the building blocks of this score is the ol\' dehn-dehn-dehn-dehnent; dehn-dehn-dehnent… and repeat. This is unfortunate, because while Beltrami\'s music is not necessarily boring, it lacks the idiosyncrasy of Kamen\'s. The earlier Die Hard scores (particularly the first and third) could be just as hard-driving, but also mournful, mischievous, and even cartoonish. They could be minimal or they could be grand. But as for the latest, more than anything else, it is simply there. Indeed, Kamen found more quirk in one bendy guitar note and some sleigh bells (the moment in Die Hard when on-the-run hero John McClane spies a girlie magazine pin-up) than Beltrami does in an hour\'s worth of released material.

But the biggest absence to dog the Live Free or Die Hard score (apart from that of Michael Kamen himself) is the lack of a piece of classical or folk music to serve as a spine for the music. Adapting the Ode to Joy, Finlandia, and "When Johnny Comes Marching Home," along with snatches of "Singin\' in the Rain" and others, Kamen brought structure—not to mention a sense of devilish fun—to the first three Die Hard scores. Not so here, which was a disappointment to fans who had long been wondering what the piece of music Beltrami would use as the platform of his score. This absence, along with the generic thudding and pounding of the action cues give the impression that the Live Free or Die Hard score takes itself too seriously by half.

Which is not to say the music is necessarily boring. The action cues, in which the entire orchestra seems percussive, flow well together. This may be the album\'s greatest strength. Produced by Beltrami, the soundtrack is a swift listen. It does not feel dull or redundant, even if it also does not feel imaginative or inspired. It is precisely the kind of action score whose best use is also its least socially responsible: scoring your efforts to dart in and out of traffic. dehn-dehn-dehn-dehnent; dehn-dehn-dehnent indeed. In truth, Varese Sarabande\'s Live Free or Die Hard has a handful of cues you may well want to crank up. It just doesn\'t have many you will want to hum afterwards. Or remember for very long.