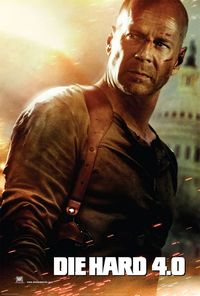 John McClane is back! Well, kind of. In 1988, Bruce Willis\' portrayal of NY cop John McClane fighting terrorists in a high rise office building firmly established him as a viable action star in John McTiernan\'s Die Hard. Followed by Renny Harlin\'s Die Hard 2, which was set in an airport, the formula was now set, but it wouldn\'t last long. For the third film, Die Hard With a Vengance, the wise-cracking John McClane was no longer fighting the system alone - now he had a buddy, in the unlikely pairing of Samuel L. Jackson. The scope of the locale was opened up as well, with most of Manhattan open to our hero. Now, 12 years later, the franchise is revisited, and John McClane is back - but the formula has been tossed out the window.

Live Free or Die Hard (aka Die Hard 4.0 overseas) finds McClane having issues with his daughter Lucy (Mary Elizabeth Winstead), when he is called in to escort computer hacker Matt Farrell (Justin Long) to the FBI\'s Cybercrime Division in Washington D.C., because of a hack attempt. Unfortunately, McClane stumbled into something bigger, as a group of heavily armed individuals try to kill Farrell just as McClane arrives to pick him up. Of course, McClane dispatches of them in some clever ways, and as the film continues, we learn that a shadowy figure (Timothy Olyphant) is about to bring down the nation\'s system, through the use of computer hacking. Will McClane stop him before chaos spreads across the nation? Will there be lots of action and explosions and excitement? Will there be lots of snarky one-liners? Will there be lots of sequences involving typing on a laptop? The answer, of course, is "yes".

But the problem with this film is, while it makes a good cyberthriller action movie, it doesn\'t make a very good Die Hard movie. McClane is now paired up again (with Farrell), and while he uses his street-smarts and fists nicely, it\'s as though the character of John McClane (with a newly shaved head) has been thrust into a film in which he doesn\'t belong. The setting is too big - instead of a singular location (an office building or an airport), now we have most of the mid-Atlantic states as the setting. The film takes us from New Jersey, to Washington D.C., to Maryland, and even to West Virginia. McClane also only has one obstacle in his way - the bad guys. In the first two films, he had people who were trying to do good, who only got in his way (the police, usually). Here, everyone wants to help - even Kevin Smith as "The Warlock", an elite hacker whose cameo feels pretty forced.

All that aside, the action is good - there are some fun and exciting sequences, and while McClane is portrayed as human - he does bleed and get injured - he also does plenty of things that defy physics and there is a sequence involving a big rig truck and a jet that is so over the top that it\'s headshaking, although fun. The film, which is the only PG-13 Die Hard movie, has some sequences that were clearly re-dubbed to remove offending language. I can understand the need and desire by the studio to tone down the swears so as to get a better rating that could get more people to see the film, but in doing so, the character of John McClane is softened. We don\'t get the snarky F-bombs that he drops so casually in the previous films.

Director Len Wiseman (Underworld) did an acceptable job with the film, and it has a pretty good visual look, and the energy is almost non-stop. The score by Marco Beltrami is similar in tone to his works for I, Robot and Terminator 3, with plenty of action. While he doesn\'t weave a classical piece through the score, as Michael Kamen had for the past three films, he does use Kamen\'s main theme - which is nice, but Kamen\'s name shamefully shows up nowhere in the credits or album!

Live Free or Die Hard was entertaining, but ultimately fails as a Die Hard film. If you separate John McClane from the story, then it will work better. It\'s flawed but fun, and will probably do alright at the box office - until Transformers squishes it less than a week after it opens.