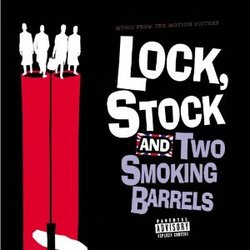 This film definitely made it on my list of one of the best films of the year. Most folks liken it to a "British Pulp Fiction" but I believe it’s much more than that. For one this film has more prevalent and darker humor than the former, but also, like Pulp Fiction, it has interweaving story threads that are tied together in a more logical and easier to follow way. This story of friends, gambling, drugs, thugs, and guns is an enjoyable romp through the back streets and underbelly of London. The major work, which is undoubtedly going to be copied by others in the future, is the editing and camera tricks. These are inherited from director Guy Richie’s experience in the world of commercials and music video, but make the transition seamlessly into the feature film world.

To accompany this oddity on screen, a rather unconventional, by Hollywood’s standards, in the use of music, both score and pop songs. In short, it’s eclectic and a perfect match for the film. We get some reggae, some James Brown, hard rock, and a touch of Zorba The Greek, all fittingly in their proper moments in the film. The soundtrack CD has these songs and score punctuated by some of the more memorable lines in the film, with some of the best actually left out. Normally when a soundtrack is released in such a format they try to jam too much in, but these dialogue pieces actually add into remembering the exact circumstances the music was used in. Most of the music used in the film has been included here on the CD, which is close to a good hour in length. Some tracks have been left off and I do wish there had been a bit more score included, however little it was.

This CD has a little bit for everyone, I even found a new group, Ocean Colour Scene, who did the opening titles song, of which to get some of their own albums. I do look forward to director Guy Richie’s next film, with this one being his first feature length production. And bravo for the music supervisors on the film, Laurence Kaye, Ian Neil, and Nicola Fletcher, folks who can find drama and humor in repurposing the familiar into the odd. Unfortunately this film had a relatively short run in mostly art-house theaters but will be returning on video August 10.