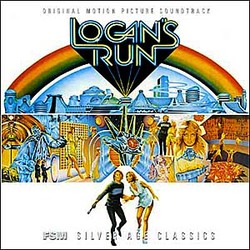 Third time's the charm, eh?  After being released first on Bay Cities Records, then as part of a double album (with Coma) on the ill-fated Chapter III Records, Film Score Monthly has finally grabbed the bull by the horns, brought it under control, and then released a lot more than just the prime rib - we get the full animal.  What beast do I refer to?  Jerry Goldsmith's electronic and orchestral science-fiction classic, Logan's Run.  The film takes place in a futuristic domed city where life ends at thirty with a slaughter known as "Carrousel".  Sandmen (official assassins) hunt down those that try to escape Carrousel.  The story focuses on Logan 5 (Michael York) and his emotional journey with Jessica 6 (Jenny Agutter) who challenges everything he believes in.

Beginning with a low electronic drone in "The Dome", a 3-note ascending horn motif takes over and slowly builds into a dramatic orchestral statement.  The second part of the first track, "The City" is completely electronic, with a seemingly random assortment of beeps and tones, but thankfully it goes into a celesta-based lullaby in "Nursery".  The score can be categorized in two parts: electronic (signifying the stuff inside the domed city), and orchestral (the stuff outside the city).  Honestly, I couldn't really get into the electronic stuff, which while it might have been "progressive" at the time, just seems hammy and noisy.  As such, cues like "Flameout", "Fatal Games", "The Assignment / Lost Years", "Love Shop" and "The Interrogation" just bugged me, and I wanted to pass over them.

Thankfully, the rest of the score is (for the most part) orchestral, and while it might not all be melodic stuff, there is an avant-garde edge to much of the dissonant material that I found to be rather exciting.  "She'll Do It / Let Me Help" uses some synthesizers with strings to create an ominous cue utilizing the love theme from the film.  "Crazy Ideas" and "A Little Muscle" have the same soft danger heard in another 1976 Goldsmith score, The Omen.  Strings and piano crescendo in a frenzied climax in "Terminated in Cathedral".  The dissonance continues over "Intensive Care", and with "They're Watching / Doc is Dead", the avant-garde effects and dissonance pretty much take over the score, with hints of melody.

The second half of "The Key / Box" is a slinky Oriental-edged cue that almost feels out of place with the rest of the score, but provides a welcome respite from the frenzied action that we've been hearing.  That motif continues through "Ice Sculpture", but turns sour and builds to a crescendo with string pulses as the cue ends.  "The Sun" is a warm uplifting cue, with more traditional orchestrations, and the love theme is heard in its entirety.  "The Monument" is my favorite cue on the album, and uses the love theme (again), as well as a more emotional rendition of the City theme heard in "The City" theme, but it turns dark and contemplative as our heroes start to learn the truth of their society.

"The Truth" is dark and brooding, but builds into "You're Renewed", a classic Goldsmith styled action cue that ends on a somber rendition of the City theme, played on strings.  The electronics return to the score as the film moves back into the city. "Return to the City / Apprehensions" starts out dark and orchestral, and slowly integrates electronic elements as the tension increases.  The worst cue on the album (in my opinion), is "The Interrogation".  As I mentioned before, the purely electronic cues annoyed me, and this one is the worst of the bunch.  Consisting of jarring tones layered over different electronic versions of the City motif, this one is the most headache-inducing Goldsmith cue I can recall ever hearing.  And it runs for four-minutes.

"End of the City" is a sweeping orchestral rendition of the love theme, and ends the score in an upbeat manner similar to how Total Recall ended.  Interestingly, the love theme reminds me quite a bit of "The Piper Dreams" from The Omen, written shortly after Logan's Run.  Capping off the album is the disco-pop version of "Love theme from Logan's Run", heard in elevators and lounges across the country.  It's smooth and cheesy, and fun to listen to, and even fades out in typical 1970's fashion.

I am glad that Film Score Monthly released Logan's Run.  There were a lot of cues unavailable on the previous releases, and the informative liner notes (as always) provide a wealth of detailed information.  I can't say that the score is the best thing to listen to; some of the electronic and dissonant cues might be hard to swallow, but with a few strong themes, there are definitely some winning tracks on this album.  With a limited run of 3,000 CDs, this is one you should consider picking up sooner rather than later.