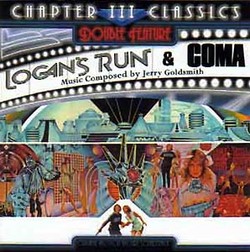 I remember a time not too long ago when Jerry Goldsmith's scores to Logan's Run and Coma were collectible items. Bay Cities Records had initially released the scores (with the standard LP length of approximately 40 minutes each) and when they went out of business, the scores went up in value. It was common to see these albums sell for upwards of $50 at some online auctions, and there was definitely an audience for them. Ironically, I kept finding these albums in the used bins for $7 at some stores, and never bothered to cash in on the "frenzy". Anyways, Chapter III Records is now re-issuing these scores on one double-feature album - and that should significantly reduce the asking price for the original CDs.

While I am not a huge fan of Logan's Run, I did enjoy the film in a rather retro-cheesy sense. While the technical aspects (costume design, visual effects, set design) are terribly cheesy, it did have - at its heart - a genuinely good storyline as well as enjoyable acting. Goldsmith's score, on the other hand, suffered from this bizarre mixture of strong orchestral themes and really dated cheesy electronic music. "The Dome" is a good example of this - it starts out with a dramatic orchestral theme that builds and flourishes (ala Alien), and then ends in a really weird bubbly electronic puddle.

The dramatic/romantic cues are classic Goldsmith, but with the main love theme sounding like a variation on "The Piper Dreams" from The Omen (also released in 1976), it sounds to me like Goldsmith might have been milking that film for all he could. Oh well. Thankfully, the more enjoyable (in my opinion, of course) dissonant and tense score to Coma is also included on this disc.

Based on the hit Robin Cook novel of the same name, Coma is a medical thriller that was directed by Michael Crichton. Yes, that guy. Believe it or not, I sometimes think that he was a better director than an author (after reading something like "Timeline"), but then I think of The Thirteenth Warrior, and I digress. Goldsmith's score to Coma is great because it is truly an ancestor to Alien, but not as dark. The orchestra is manipulated into ways I wouldn't have thought possible. The harpsichord with the echoing chords still creep me out. Amidst all of this chaos and dissonance, Goldsmith has also written a really enjoyable love theme. In fact, it's the first track on that section of the CD, and it's so optimistic and, well, 1970's, that you can't help but enjoy it. Also the fact that it goes right into a dark cue ("Study in Anatomy") provides such a great contrast that this is still one of my favorite Goldsmith scores from the '70s.

Speaking of the '70s, what soundtrack from that fabled era would be complete without a disco track? Yes folks, there are a few disco tracks on this album. "Disco Strut", of course, and "Love Theme from Coma (Disco Version)". Now how could anyone not enjoy that? Yes it's cheesy and dated, but hey - at least Goldsmith beat Meco to the punch!

As far as the album itself goes, it's not too bad. The sound mix seems to be the same as the older CDs I have, so I'm guessing that there wasn't really any remixing going on. The liner notes are minimal, and in a very annoying move, Chapter III decided to put the track listing on the inside of the cover, in the middle of the foldout insert. So to check the tracks, I not only have to open up the case, but I have to pull out the insert and unfold two layers of it just to get to the listing. This holds true for the three other Chapter III Classics releases, and I hope that for the future issues, they opt to go an alternate route.

Coma and Logan's Run are probably not for everyone. They are rather unique scores in their own right, and while parts of them are seriously dated, both of them have the fortune of being rather good examples of Jerry Goldsmith's style back in the late 1970s. It's definitely worth having in your collection if you don't have them already.