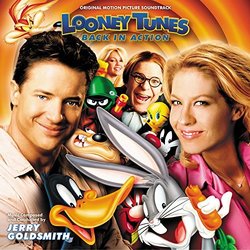 Looney Tunes: Back in Action

Review: Looney Tunes: Back in Action

The long-standing collaborative relationship between director Joe Dante and composer Jerry Goldsmith has usually produced some rather interesting results. Whether it be the synth-heavy fun of Gremlins, the playfulness of The 'Burbs, the adventure of Innerspace or even the military action of Small Soldiers, the music for the films they work together on tend to be stand out efforts. While the films themselves might have mixed results, a core group of fans will always rally around Dante's efforts, and Goldsmith's score. For their latest venture, Looney Tunes: Back in Action, Warner Brothers couldn't have picked a better director. After teasing us with Gremlins 2, which was in some respects a live-action Looney Tunes-edged film, Dante seemed to be a natural choice. The resulting film, while starting off a bit choppy and preventing any real emotional connections from forming for the first 20 minutes, was indeed a "Looney Tunes" film. Interestingly, it was more of a Daffy Duck film than a Bugs Bunny film - but since Daffy is more zany, he's more fun to watch - especially his interactions with the live-action cast.

Plot-wise, the film follows ex-Warner Brothers security guard DJ Drake (Brendan Fraser), who teams up with Daffy Duck (who was also fired) to find his father, Damien Drake (Timothy Dalton) who is not only a famous actor, but also a super spy. Seems the head of the ACME Corporation (Steve Martin) wants the fabled "Blue Diamond" which can turn people into monkeys. Studio executive Kate (Jenna Elfman) joins them (and Bugs Bunny, of course) to get Daffy back - because what is a Bugs Bunny cartoon without Daffy? Mayhem ensues, with plenty of gags, in-jokes, cameos, and other classic bits which will keep your eyes busy. The jokes come fast and furious, and while a few might not stick, the ones that do more than make up for it.

The soundtrack album, starts off with Carl Stalling's "Life Story", also known as the melody for the "What's Up, Doc?" song from the classic shorts so many decades ago. The main theme that Goldsmith wrote is first heard in "What's Up?", underscoring a Warner Brothers board-room meeting with Bugs and Daffy. As one would hope for from an animated film, the music jumps around a bit, underscoring the on-screen action. In "Another Take", when Daffy is banned from the studio, the music playfully bounces around, even throwing in a weepy violin for effect. Damien Drake's theme is a James Bond-ish guitar melody, first heard in "Out Of The Bag". This cue ends with a small chunk of the Gremlins theme. Why? Because DJ and Daffy head out to Las Vegas in a Gremlin. Get it? That's pretty much the limit of the musical jokes in the score, which is a shame since Stalling tended to litter his scores with plenty of references and allusions to other works.

"Car Trouble" underscores a rather fun action set piece in Las Vegas. The driving guitar rhythms and flirting strings, combined with the expected Goldsmith brass (and even a little electronics running beneath it) make it one of the fun stand-out tracks on the album. "Thin Air" has the first use of Raymond Scott's classic "Powerhouse" melody, this time with electric guitar chiming in. "We've Got Company" combines "Powerhouse" with what feels like a bit of Gremlins 2, but without the gremlins. In the film, it's a fun scene where all sorts of monsters (in Area 52), escape and attack our heroes, allowing Dante to cameo plenty of classic movie monsters. From there, we're off to Paris and the Louvre. This is best represented, of course, by accordions. "Paris Street" plays more like a source cue, with guitar and accordion. It really couldn't be any more clichéd - it even just fades out at the end!

"Free Fall" has some very a-typical Goldsmithian rhythms, the pounding timpani and brass are certainly his style! "Tasmanian Devil" ends with an African rhythm section (and melody) that hearken back on The Ghost and the Darkness, which is continued in "Jungle Scene". It's enjoyable enough, but at times it just feels like Goldsmith is going through the motions.

The biggest problem I have with this album is that it just ends. At 37-minutes long, it just stops, after "Merry Go Round Broke Down". There is no climax to the film. There is no emotional conclusion. Why? Because Goldsmith didn't finish off the film - John Debney stepped in to write 16-minutes of score - the finale - because due to editorial changes, Goldsmith just didn't have time! It's a shame it wasn't included on the album here, and as a result, the listening experience of this album is severely hampered by it. One nice bonus, though, is the choral "Walmart" product placement song, hidden after "Merry Go Round Broke Down".

This is an alright album - the score worked better in the film, but the problem there was that the sound mix was so low, you couldn't hear the music half the time. There's also plenty of music missing from the album (beyond Debney's contribution) and as a result, it feels like there are gaping holes in the listening experience. Completists and Goldsmith fans need apply only.

Note: for sound clips from the album, be sure to check out the Varese Sarabande website!