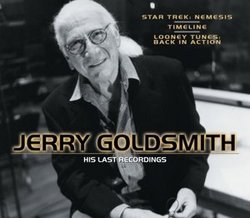 February 10, 2007 would have been Jerry Goldsmith's 78th birthday. Sadly, we lost this legendary composer in the summer of 2004.

Star Trek Nemesis (2002) allowed Goldsmith to revisit his famous Star Trek themes for a final time. Along with this fond look back and farewell to the Enterprise and it various crews, Nemesis also received a stunningly beautiful new theme that captured the romance of space exploration in such an unexpected and brilliant way.

Goldsmith's score for Star Trek Nemesis was followed by an extended period of work on the Richard Donner directed film Timeline (2003). The project allowed Goldsmith to compose an epic work in the style of his magnificent for Lionheart (1988) and First Knight (1995). Timeline also reunited Goldsmith with Donner for the first time since the composer had won an Oscar for his landmark score for The Omen in 1976. Timeline was written by none other than Michael Crichton (Jurassic Park), another long-time friend and collaborator of Mr. Goldsmith's.

Extensive reediting of the film, after the point where the score had been recorded, lead to a new composer and a new score being composed. Goldsmith's grand, penultimate opus found exposure only on the posthumous CD release of his music—a release he personally requested, for his fans.

The score that turned out to be, unthinkably, Jerry Goldsmith's final film score, was Looney Tunes: Back In Action. While seemingly an unusual film to cap such a historic career, Looney Tunes did allow Goldsmith the opportunity to work one last time with his long-time friend, director Joe Dante. The two had previously joined forces for the blockbuster Gremlins (1984), The 'Burbs (1989), Small Soldiers (1998) and many others.

The score for Looney Tunes: Back In Action showed Goldsmith to be full of energy and wit. It's an enormously fun score with depth, complexity and intelligence. To end a career exhibiting so much enthusiasm for his art and showing so much genuine creativity is, in fact, very much in keeping with what one would hope from the legendary composer of such classics as Patton, Planet of the Apes, Chinatown, The Omen, The Sand Pebbles, Alien, Star Trek: The Motion Picture, Basic Instinct, LA Confidential, The Mummy and so many more!