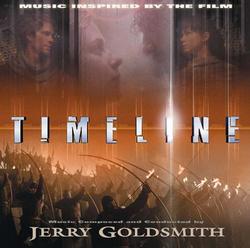 Timeline - Music Inspired by the Film

Outcry after outcry has erupted from film music devotees over the past few months since Jerry Goldsmith's death. "The mainstream media ignored one of the most important film composers of the last fifty years," cried one group of fans, while another answered, "Goldsmith was underappreciated in his last years, only writing for films below his talent. When will film music ever get its due?" The most recent complaint came with the Oscar telecast "recognizing" the passing of Goldsmith, Elmer Bernstein, and David Raskin by playing their scores as filler music without ever mentioning this fact to the home audience (beyond their brief inclusion in the annual "In Memoriam" segment).

Yet with all the consternation lavished upon this topic, we seem to have forgotten one important fact: Jerry Goldsmith was a great composer. Period. No matter what movie they accompany (or in this case don't accompany), Goldsmith's scores stand apart. I have been listening to his next to last project, the unused score for Timeline, incessantly for the past few days. I must admit that often when I review a score, I only listen a couple of times before sitting down and writing the review. But with Timeline, I can't stop listening. There are so many layers stacked upon layers that I never want the listening experience to be over. Even my wife has noticed the difference in the score. She usually goes about her business not noticing the score currently playing in the background, but this morning she stopped, listened for a moment, and remarked, "That music is marvelous. Who is it?"

Who is it indeed. It is one of the great talents of his generation, and while we are certainly sad at his passing, at least his music lives and breathes and reminds us of his generous soul. And what a reminder we have in his score for Timeline. We are all familiar with the story of how Goldsmith wrote the score twice, was called in to re-write a third time and refused, and how his score was replaced by one from Bryan Tyler. Fortunately, Varese Sarabande has released this score in a fine package that includes the score in SACD multi-channel digital audio.

Timeline is not a typical "flood the musical space" action score that depends on electronics and little imagination. It is thoughtful, introspective, and uses the immense variety of compositional techniques available to modern composers. The main titles, "The Dig," open with a series of dense cluster chords in the strings punctuated with pitch-bending brass. It is a technique right out of the texturist playbook and wonderfully establishes a mood. Then, turning on a dime, the second cue, "Cornflakes," is one of the most heartbreakingly beautiful cues on the score and introduces what must have been a love theme. It is simple, plaintive, scored with strings accompanying piano, flute, and double reed. In its balance and simplicity, it is perfect musical craftsmanship personified.

The score continues with this move between extremes, presenting majestic actions cues alongside gorgeous slow writing, but the true reason to buy this score are the final two cues. "Prepare for Battle/Victory For Us" is an over-the-top interweaving of the two major action themes combined with brass fanfares and relentless percussion. The cue puts to rest any rumor about the score being rejected because it lacked action writing. The only difference between this cue and one by any number of younger working composers is that Goldsmith writes with clarity. You can hear each layer of musical information and as they climax, the audience is taken along because the build-up is carefully planned over the cue's eleven minute length. In stark contrast, the final cue, "To My Friends," exists as a fitting epitaph for Goldsmith. He takes the theme first presented in "Cornflakes" and reworks and expands it to include the entire orchestra and gently end the score.

Is Timeline Goldsmith's best score? Not at all, but it is an excellent piece of action scoring and, ironically, will live longer than the movie it was supposed to accompany or the score that replaced it. Varese Sarabande has done a marvelous job with this release. The sound design is rich and full and I couldn't think of a better tribute to Goldsmith than this worthy release.