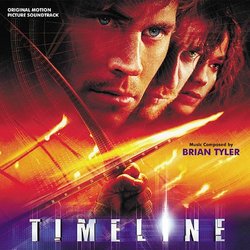 Timeline was an unfortunate mess of a film, requiring multiple re-shoots and changes in post production.  Along the way, composer Jerry Goldsmith left the project, after writing his score and making changes to accommodate the ever-fluctuating picture.  Replacing him was composer Brian Tyler, who while relatively fresh on the scene, has already provided some impressive scores such as Frailty, Children of Dune, and Paramount's The Hunted.  It was his work on this last project which probably led to his hiring on Timeline for both political and artistic reasons.

The film, based on the novel by Michael Crichton, follows a team of graduate school archaeological students sent back to 14th Century France to rescue Professor Johnston (Billy Connolly).  Heading up this rescue mission is Johnston's son Charles (Paul Walker) who isn't an archaeologist - but maintains an unfulfilled romantic desire for Kate (Frances O'Connor).  Of course, they themselves encounter trouble, and need to get out of there before their "markers" run out of time and leave them there forever - but doing so without altering the past.

The soundtrack opens with the "Main Title" cue - oddly named, as I don't recall there being a main title in the film!  Nonetheless, this track serves as a great opening to the album, filled with a triumphant and bombastic rendition of the main theme from the film.  Heroic, and epic in scope, it immediately pulls the listener into the album.  The album is not sequenced in chronological order, which works to its benefit - there is a pleasurable flow to the tracks.

While a majority of the score is filled with action-heavy music, there are a few moments where things calm down enough to enjoy the emotional aspects of the film.  While I found the romance between Charles and Kate to be less believable than the one we were forced to believe in Star Wars: Episode II, the romance between Marek (Gerard Butler) and Lady Claire (Anna Friel) was more plausible.  As such, it has an appropriately tender love theme to underscore their blooming love.

One of the action themes heard in "Night Arrows" (as well as other tracks) feels like a sibling to Tyler's Children of Dune theme, but with a little more tension.  One drawback to this score is that once the rhythms and ostinatos have been heard and established, they start to slowly lose their power over the next 45 minutes.  To say that the score worked well for the film is fitting, only because there was not much substance to the film.  That isn't to say Tyler's score is lacking substance; it's just that once you hear the core chunk of music, the rest becomes a bit unnecessary.

Tyler has a lot of promise as a composer, and stands primed to break out as one of the major talents of his generation.  It's always a shame when such talent is wasted on bad films, but those that are interested in Tyler and his work should not pass up this album just because the film did poorly.  With Godsend and Sahara on his upcoming films roster, we can continue to expect better films and music from Tyler in the year to come.