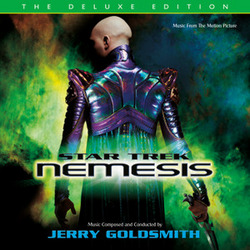 It was, sadly, one of Jerry Goldsmith's last film scores. In 2002 he took his final voyage on the fabled USS Enterprise and gave Star Trek: Nemesis and the whole Next Generation crew an epic send-off.

This is the release so many Star Trek fans have been waiting for. Goldsmith's complete score from Star Trek: Nemesis is presented, along with a set of bonus tracks that includes source music, a set of alternate cues and mixes, plus a rare opportunity to listen in to the final moments of Jerry Goldsmith on the Star Trek scoring stage with his orchestra and director Stuart Baird.

We're very excited to mark the return of the Varčse Sarabande CD Club with this historic and important Jerry Goldsmith release.