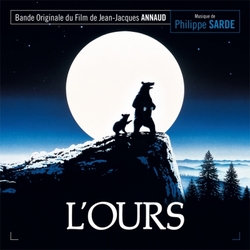 In collaboration with Pathé Films, Music Box Records presents the remastered and expanded 30th anniversary edition of Philippe Sarde's score to the 1988 adventure film The Bear directed by Jean-Jacques Annaud.

The Bear was released on 19 October 1988 in France, and 27 October 1989 in the United States. The film was a huge success in France. Adapted from the novel The Grizzly King by American author James Oliver Curwood, the screenplay was written by Gérard Brach. The film tells the story of Youk, a playful and clumsy orphaned bear cub who travels through the preserved landscapes of British Colombia in the late 19th Century and befriends an adult male grizzly. This budding friendship is threatened by the unrelenting chase of two hunters. There are no dialogues in the film: sounds and atmospheres, lights, landscapes and music carry the meaning of the story instead of language.

For the score, Jean-Jacques Annaud wished the music to be built around a theme that would be easy to remember and chose the Barcarolle from op.37a of Pyotr Ilyich Tchaikovsky's Seasons. Philippe Sarde decided to transform this simple and touching melody for piano into a great symphonic piece. He also composed various original themes, oscillating between orchestral denseness and more intimate moments. Carlo Savina conducted the London Symphony Orchestra. The album also includes bonus tracks with previously unreleased variations on Tchaikovsky's theme, recorded by Philippe Sarde at the time of the production, and played by great soloists such as Keith Harvey (cello), Michael Davis (violin), John Williams (guitar) and Hubert Laws (flute).

Assembled by Édouard Dubois and supervised by the composer, this newly remastered album features the same program as the previous vinyl and CD editions released in 1988; but rather than presenting this content as suites, the album offers new editing choices and a new order to ensure the best possible listening experience. The 12-page booklet features exclusive liner notes by writer Sylvain Pfeffer discussing the film and the score with new comments by Philippe Sarde and Jean-Jacques Annaud.