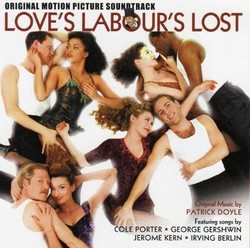 The bygone era of the Hollywood musical may seem reserved for the memories of society's doyens and dreamers, but the doyens and, above all, the dreamers are keeping the memories in the movie theaters. Using that thought as a guide, imagine a play by William Shakespeare being adapted and directed by Kenneth Branagh into a musical. Yes, a Hollywood Golden Age-style musical!

Assembling 10 standards by the likes of George Gershwin, Jerome Kern, Cole Porter, and Irving Berlin, it definitely sounds as though it should be glamorous. "The Way You Look Tonight" and "They Can't Take That Away from Me" reach high for the goal, the terribly mixed "Let's Face the Music and Dance" tips the ladder backwards, but all of the songs are skillfully arranged and generally integrated well with Doyle's underscore.

The score by Patrick Doyle is experienced and opulent, a sort of glitzy second cousin to Much Ado About Nothing. There is an overture the composer deliberately styled after the classic MGM openings, that succeeds in summoning the past with uncommon grace. There are "quintessentially English" (Doyle's terminology) transitional and introductory cues, and a powerful theme for the nobles central to the storytelling. Honestly, it is quintessentially Doyle—fancy-free, and free for anything fancy. There is also a newsreel track that carefully parodies the news and propaganda music of old—a sporting march that sounds as suitable for a football game as for... a Shakespearean musical? Forget that. It simply sounds terrific.

One problem is, it is quintessentially Doyle. Knowledge of his past work brings warm familiarity upon hearing Love's Labour's Lost, but also a questionable degree of predictability. One can tell when the music is about to swell, when it is about to change tone, or when it is about to segue into song... True for the individual technique of every good composer, but different projects (particularly those that are this different) ought to have more than a few distinguished challenges.

But enough about the score. This is a musical, and to say the vocalists are tolerable is a beau geste. Most are not trained singers, and among those who are, notably Nathan Lane and Adrian Lester, the performances are limited in time and technique. Branagh, who sings with a throaty timbre, cast based on acting rather than musicianship, but why not both? Other performers are Alicia Silverstone, Matthew Lillard, Geraldine McEwan, Richard Briers, and Alessandro Nivola. James L. Brook's I'll Do Anything used similar tactics that, in combination with bad press, failed to interest test audiences, forcing a major re-edit. Oh, there's no business like show business. Love's Labour's Lost is perhaps too charming for objective or optimistic souls to attack, but will general listeners allow the dubious singing, even though it is good-natured and honest about its shortcomings? Will moviegoers care to face the music and dance?

The soundtrack does not redefine the genre as the film itself may, the vocals will surely raise eyebrows, but it does have a typically pleasant score from Doyle and a set of ageless tunes. They can't take that away.