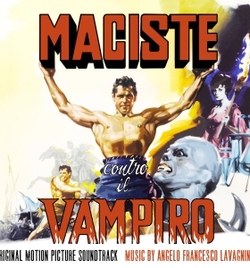 Alhambra Records is proud to present on this CD the world premiere release of Angelo Francesco Lavagnino's 1961 peplum score MACISTE CONTRO IL VAMPIRO which may be better known by its US title GOLIATH AND THE VAMPIRES. This exciting CD project û the seventh CD in our Lavagnino series û has only been possible thanks to the generous support of the three daughters of the composer û Bianca, Iudica and Alessandra Lavagnino -, who still had open reel tape copies of the original master tapes in their personal archive.

Directed by Giacomo Gentilomo and scripted by later regular Italian spaghetti western directors Sergio Corbucci and Duccio Tessari, MACISTE CONTRO IL VAMPIRO is a richly atmospheric, often almost surreal and absurd, but on the other hand visually exciting and stylish fantasy picture which mixes peplum and horror genre motifs and during the last few decades has become a genuine cult classic especially among genre fans in the USA. Gordon Scott, who had already become famous as screen Tarzan in the USA during the 50s, stars as Maciste whose village is raided and plundered. The women are kidnapped, including his fiancÚ Guja, who is played by Leonora Ruffo. Maciste is off on a quest to find his sweetheart and the evil men behind the raid. The culprits are a league of blue zombie-men controlled by a hideous vampire-leader named Kobrak. Weird magic and various horrors, among them the treacherous Gianna Maria Canale as Astra, the mistress of Kobrak, stand between Goliath and his beloved.

As was common practice during the early 1960s with some of these Italian peplum scores, their English dubbed versions distributed by American International Pictures (AIP) in the USA were often re-scored by AIP's staff composer Les Baxter. This was also the case with the US version GOLIATH AND THE VAMPIRES, although Baxter here apparently only re-scored the Main Title, the Finale and a few other sequences, whereas many other tracks by Lavagnino were retained. Our CD, however, contains only the music which had been especially composed and recorded for the movie by Lavagnino himself in Italy in 1961 and which has never before been heard on any sound carrier.

The "Main Title" introduces the stirring and heroic main theme for full orchestra underpinned by steady timpani beats which characterizes the determination of Maciste and the adventurous spirit of the movie. It often recurs throughout the film, several times also in a minor key to underline tragic events with Lavagnino's characteristic use of the viola backed by harp or soft strings. Lavagnino is fully in his element when dealing with exotic dances in this picture. The graceful and charming dance of the veils in the Sultan's palace ("Palace Dance") for mandolins and high strings is one of the most beautiful pieces of this kind from all his peplum scores.

For the apparitions of the vampire himself Lavagnino has created an otherworldly sound palette with weird atonal violin û a kind of devil's violin û, xylophone trills, eerie electric organ, guitar riffs and low-end piano ostinatos which make those sequences even more unsettling than they already are. Moody and spectral atmospheric music is reserved mainly for the sequence in the cave where Maciste and Guja discover the wax-like bodies of Kobrak's victims or for the trek to Kobrak's mountain. Only in the end when Guja is revived solo viola and harp celebrate the love of Maciste and Guja again in a deeply romantic fashion and a joyous variant of the main theme closes the picture.

We hope that many fans of the composer and of classic Italian film music will enjoy this exciting peplum score with its quite peculiar exotic and magical flair. Our CD edition with an 8-page booklet which contains numerous colour stills from the movie will be limited to 500 copies.