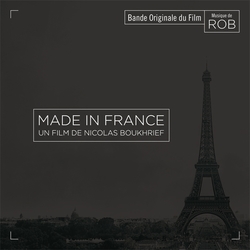 In collaboration with Hippocampus and Radar Films, Music Box Records presents the premiere CD release of the score for Nicolas Boukhrief's Made in France (2015) composed by Rob.

Rob utilized cinematic codes, as if this were a John Carpenter film: sequences made spine-tingling by use of electronica, rhythm machines, and film noir themes. The electronic score has a very late-'70's vibe. For this premiere release on compact disc, Music Box Records has added three bonus tracks which did not appear on previous vinyl or digital releases.