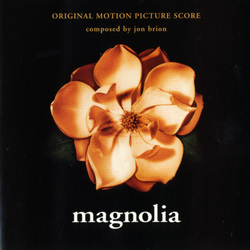 If you haven't seen Magnolia yet, try to find it at a second run theater, or at least make a point of renting it when it comes out on video/DVD. It's still in my top three in last year's offerings from Hollywood. P.T. Anderson's work is incredibly artful and full of risk-taking (how about the medley of characters on screen singing along with the Aimee Mann tune?!). Granted, the payoff isn't always there and sometimes the results seem downright corny, hokey or contrived, but the vision is always there - always true.

The score release to the film contains nine tracks, eight of which are great, and make sense on the offering, and one that I will label (probably unfairly) 'filler' (more on this later). The first track, "A Little Library Music/Going To A Show", is reminiscent of Tchaikovsky. I'm not quite sure why. Maybe it's the warm, woody sound in the strings, or the dark, smooth colors in the horn/string doubling. Regardless, this beautiful piece sets the mood for the score - dark, brooding and introspective. Very minor - making the major landings that much more powerful and rewarding (throughout the score). Immediately, one realizes this is original, multi-layered music, full of an abundance of counterpoint and complex emotions - kind of like the film. The Aimee Mann collection of songs served the film every bit as well as Jon Brion's score. Which leads me to hold the opinion that P.T. Anderson is probably the most astute, in tune director of film today when it comes to the musical aspects/aesthetics used to complement the picture on screen. This is not at all surprising if you've heard him discuss his writing and creative process. He claims to always write with music in his head (if not literally in his ear). He is truly a musician's director.

The next two tracks continue in the vein of the first; very warm, dark orchestral arrangements - very European sounding. A beautiful listen when you're in a very focused mode. "WDKK Theme" is the theme song for the fictitious television station in the movie. It's essentially a filler piece with a jazzy horn arrangement a la, "Heeeeeeeere's Johnny!" It's actually a little disruptive to the thru-line of the other material. I wish it hadn't made the cut.

The remaining tracks fit nicely with the rest of the pieces on the offering, and feel like "modern classical". There's also something very sexy about this music. The woodwinds are handled in a very staccato oriented fashion much of the time, but when Brion utilizes a melodic conversation in the winds, it becomes very sexy music. "So Now Then" features a nice guitar surprise which (I believe) borrows heavily from one of the Aimee Mann tunes on the soundtrack. This is a very cool use of more pop harmonies as outlined by the guitar.

Overall, I think this is a wonderful disc, much more complex and rewarding than your average Hollywood score. There are some colors here that I haven't heard in a while in a major film score. I don't think this collection is for everyone, but if you want to really open your ears up and explore some deep themes, you will not be let down.