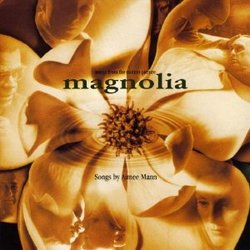 Magnolia… hmm… A magnolia is a flower. Flowers make people happy. "Sure, I'll write a review of the Magnolia soundtrack for you. The songs will probably pick me up, get me going."

"Hmmm… songs by Aimee Mann. Hey this is just getting better and better. I love Aimee Mann."

Keyboard intro… she starts to sing… No reverb. Almost nothing… very intimate, desperate tone. "One is the loneliest number that you'll ever know…"

So much for that "happy" thought.

Okay, so the soundtrack is definitely not a pick-me-up - lyrically anyway. The album consists of nine songs by Aimee Mann (formerly of 'Til Tuesday), including a cover of One by Three Dog Night, a couple thrown in from Supertramp, one from Gabrielle and one from the film's score composer, Jon Brion. I have very few complaints about this effort. In fact, the only real beef I have is the "let's throw this tune on" attitude. I think the collection would make more sense if it only included the Mann material. The additional four songs seem to detract from the (solid) through line created by the first nine tracks.

Most of you have heard "The Logical Song" and "Goodbye Stranger" by Supertramp. I don't need to discuss these. They sound as good as ever and it's always fun to hear Roger Hodgeson wail. The Gabrielle song, "Dreams", features the only "happy" lyrics on the collection. It seems a bit out of place here, but, as I'm sure the film presents some sort of redemption and catharsis near the end of the film. The song is, at the very least, well placed in it's slot (#12) on the disc. Jon Brion's piece is fair. I was hoping that his included composition (bearing the film's title) was the piece featured in the movie trailer. After seeing that trailer I actively sought the information on the orchestral piece in it. This said, we can only hope that a film score album is in the works.

Director P.T. Anderson knows his music and knows how vital music is to the pacing and emotional layers of a film. If his characters in Magnolia are as messed up and lost as those in Boogie Nights - and I'm sure they are - the music fits like a glove. The standouts for me include Momentum (heard in the trailer and TV spots) which features some great jazzy lines and a sassy trumpet. It's very cool to hear her haunting, lonely vocal tone against these colors. The featured "Don't Worry Be Happy"-esque lyric here is: "I'm condemning the future to death so it can match the past."

"Build That Wall" again has some "happy" musical elements fighting against the lyric content. ("Hey, I'm starting to like this juxtaposition already and it's only track three.) The use of the glockenspiel and celeste give the tune a childlike innocence while the lyrics about a girl building a "wall" to protect herself from feeling provide a great "counterpoint."

"Deathly" features the lyric, "Now that I've met you, would you object to never seeing each other again?" Hmmm… didn't I hear that line come from one of the actresses in the trailer? Very thoughtful work on Mann's and P.T. Anderson's parts.

The other thing that I wanted to hear during my listening was some involvement from Mann's husband, Michael Penn. He shows up on "Driving Sideways" (electric guitar & BG Vox) as well as a couple other tracks. It's always great to hear his voice and musical flavorings. The other cameo that popped out for me was Benmont Tench's piano track on "Wise Up". He plays a very sparse, simple partnering of piano with the lonely vocal tone again. It's easy to see why Tom Petty has stuck with him. She pulled a fast one on me with the lyrics here. "It's not going to stop 'til you wise up." (Hey, this is going to be the HAPPY song!) "No, it's not going to stop, so just give up." So much for the happiness.

Overall, the album (by "album" I mean Aimee Mann's nine songs) has a great, organic tone, due in large part to the processing, or lack thereof, of Mann's voice. It's always right out front, very little reverb or anything of the sort. There is a little compression and EQ - and that's about it. The arrangements are solid, real. The instruments are live - as are the musicians. This is a great buy if you're a fan of Aimee Mann, but even if you don't care for her, I would still recommend this album because the compositions won't fail you.