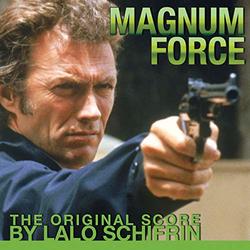 Clint Eastwood returns as Harry Callahan, ready to clean up crime from the streets of San Francisco, in this sequel to the popular, trend-setting Dirty Harry. Accompanying him once again is composer Lalo Schifrin, diving again into his hefty bag of grooves, heavy bass and jazzy style. Dirty Harry provided Schifrin an ample opportunity to craft a cool, creepy and melancholy score, full of tabla riffs, electric piano and solo female vocals. This time out he beefs up the package further, in terms of more brass, bass and even the vocals. A selection of these tracks had previously appeared on a 1998 compilation CD, along with tracks from other films in the Dirty Harry series.

The "Main Title" starts with some with riffing in the percussion, cello and electric piano before you hit a insistent groove bursts forth in the bass guitar and gruff synthesizer, which could almost approximate Eastwood\'s own gravely voice. Then female voices and the synth combine for the main theme, which contains big intervallic leaps and a swaggering bridge. The track is further highlighted by punchy brass and martial percussion solos near the end. The next track, "The Cop" presents Schifrin’s more disjointed, discordant music for the dark underbelly of the city, driven by muted horns, martial drums and a cold synth rendition of the main theme.

"Harry’s Ostinato" revisits material from the original Dirty Harry score, with upright bass, electric piano and pattering tablas. "Stakeout" begins strongly with swinging brass then moving into suspense mode with tablas, tremolo strings and piano. The pace picks up again due to timpani, high hat cymbal and upright bass. "The Crooks" amps up the pace again with a driving drum set, bass and swinging big brass. A brief respite is provided by chilled, 70\'s jazz in "Harry\'s New Friend", certainly a product of its era. Smooth riffing on electric bass and electric piano in "The Pimp" follow, which pretty much is the exact music you might play in your head when you read the track title, but then suspense takes over.

Martial snares and the cold synth from "The Cop" return briefly in "Rogue Gun", but the edge is softened by both another slice of relaxed 70\'s jazz in "Recreation" and an electric piano solo in "Warm Enough". A lengthy track follows, "Palancio", revisiting material heard in "Harry\'s Ostinato" and the original Dirty Harry, in a suspenseful, stalking track which keeps a steady pace through tablas and bass and includes some exciting flourishes interspersed. In "The Faceless Assassin", the tone moves gradually from the martial snares and suspenseful strings and piano and the halfway through breaks into an up tempo, yet still ominous variation on the main Magnum Force theme. "Potrero Hill" brightens the tone but continues the fast pace in great three minute groove for drums, brass, sax, guitar and Hammond organ.

Subsequent tracks vary between Harry\'s ostinato and the sparse, discordant material. More purposeful action picks up again "Briggs" where the snare drums rally and the brass blast in a short cue which calls forth combatants for battle. This leads into the inevitable "Confrontation", where the tension is tightly comprised of frantic tablas, bass, pizzicato strings and flutes. The "Finale" begins with a melancholy flute solo above a bed of mid-range strings, which are soon joined by the electric piano for Harry, all in a low key, downbeat close to the film, score and album. This is a bit of an unexpected capper for the experience, but the main highlights end up being presentations of the main theme, material revisited from Dirty Harry and the various groove oriented tracks. There are some abstract suspense cues that could be skipped but overall it is marvelous to preserve more of Schifrin\'s unique contributions to film music.

Go ahead, Lalo, make my day!