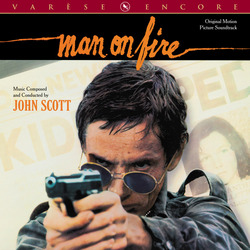 This classic John Scott score from 1987 returns in the Varčse Encore series. The score features a justly famous main theme which is unquestionably one of Scott's best. The unusual thing here though is that its fame is largely due to it's appearance in another movie entirely. The resolution and embrace between John and Holly McClane at the end of Die Hard—that's John Scott's Man On Fire. Sweeping and lush. Other parts of the score—much more intense. Remastered and available for the first time in over two decades!