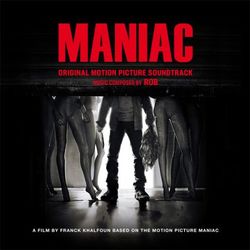 In collaboration with Hamburger Records and La Petite Reine, Music Box Records presents the CD reissue of the score for Maniac, the 2012 remake of the classic 1980 slasher film. With Lord of the Rings' Elijah Wood in the title role, this new Maniac retains the original's horrific poetry as a penetrating, no-holds-barred delineation of the psychological intricacies of compulsive killer of women, conveyed in the first person.

The film's musical score is composed by Robin Coudert (Horns, Revenge), a French electropop and rock instrumentalist who has gone by the professional name of Rob since his debut in 1998. Rob, who has been scoring films since 2005, conveys the nightmarish soul of the maniac, Frank Zito. The music, like the film, doesn't excuse Frank's raging violence, but Rob musically the tortured soul the lurks behind the killer's haunted eyes. Rob reflects the flavor of Maniac's 1980's antecedent by creating a keyboard-based score built of rhythmic melodies and riffs created by 1980s era synthesizers.

For this reissue of Rob's Maniac score on compact disc, Music Box Records presents the same content as previously released in 2015, including five bonus tracks which did not appear on previous vinyl or digital releases. Some of them are early versions of the score's primary motifs which afford a glimpse into Rob's working process as he developed and finalized the Maniac score. The CD comes with an 8-page booklet featuring liner notes by Randall D. Larson who discusses the film's conceptualizations and how Rob's score helped create a thorough musical portrait of a disturbed, and very dangerous, psychotic maniac. The release is limited to 300 units.