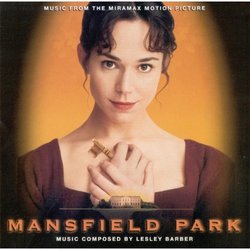 by David A. Koran December 13, 1999
4 / 5 Stars
The film, Mansfield Park, is yet another adaptation of the writings of Jane Austin (Pride And Prejudice, Emma, and Sense And Sensibility) done in a more non-traditional style than purists would come to feel comfortable. Being a romantic comedy, the humor involved is all in the words and eye of the storyteller, and you’ll walk away from the film either really liking it or hating it. The film stars Australian beauty, Frances O’Connor, as Fannie Price, a woman who was born into poverty and was later shipped off to live with her rich relatives, only to become entangled in an odd love triangle between three men.

Taking a cue from Rachel Portman and Patrick Doyle, Lesley Barber keeps the music period rather than putting a modern spin on it (as Hollywood is so fond of doing nowadays). The result is a truly terrific main theme (which you can hear during the Flash preview on the website) but also a rather pleasant and appropriate score given the lightness of the screen action. I’m reminded of Simon Boswell’s work on Cousin Bette and George Fenton’s Dangerous Beauty in the melodic path and musical arrangements Barber takes with the film’s score. It’s a classically inspired score, chamber music-esque, and slightly minimalist in style. The rest of the score excerpts the main theme melody occasionally, but becomes wide and sweeping in parts. Overall a very pleasing and listenable score, a must for any fan of period drama/comedy films.

For the fourth feature in Barber’s repertoire, Mansfield Park stands as a proud achievement. When coupled with Price Above Rubies, provide us, the listener, a glimpse at a composer who’s to be looked out for in the future, possibly becoming a member of the second golden age of film score composing. Support these smaller films that are good but don’t get the press they need by picking up this wonderful score, and if you’re lucky enough, catch the film in it’s first run before being relegated to a section in your local video store.