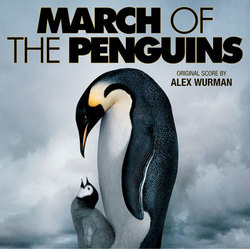 March of the Penguins

Review: March of the Penguins

La marche de l'empereur is a French documentary that's been getting some extremely good word-of-mouth, a gorgeous cinematic experience detailing the annual, single-file trek of the Emperor penguin from the coasts of Antarctica into the bare and uninhabited heart of the icy continent to mate. The eggs laid, the females walk back toward the ocean, leaving their mates on empty stomachs with an egg to protect. The American release of the documentary has an English narrative track by none other than Morgan Freeman and a score by Alex Wurman, which has been released by Milan Records.

This is a beautifully subdued work that could have turned into a cheap, new-agey experiment into sustained synthesized chords but is instead rescued from such a dreary fate by delicate melodies, light percussion, and a rich, desolate sound palette. This emptiness is accomplished by saturating the very high and very low pitches and leaving the mid-range portion of the orchestra bare, a dry, glittering feeling of desolation which is heightened occasionally by obscuring the meter of the piece. Wurman puts the emphasis on the flute and the piccolo, with exotic flute flourishes recalling an animal shaking water off its back. The style itself is like a fusion of Mychael Danna's, with heart-tugging flute work, gamelan, and sparse electronics, and Thomas Newman's, with the light percussion and twitchy piano, but its more film-score-like moments evoke the magic of an Alan Silvestri opus.

Antarctica being a mostly international continent with a number of territorial claims, Wurman brings some world colors to his score, complementing the European scales and harmonies with African beats, Middle Eastern modes, and Asian tones. It could easily have been a mess, but Wurman knows how to pull it off and how to include these influences into the overriding musical signature of the score, so that we barely notice these worldly nods are there. Far from being melodically hollow, March of the Penguins contains a number of recurring themes, among them a piano melody which bookends the score. The Newmanesque percussion and piano, along with the flute flutters, sometimes sound like something out of an urban romantic comedy, especially when the strings walk in. It doesn't become cheesy, but rather gives the penguins a humanity and helps make the listening experience all the more interesting.

Alex Wurman's March of the Penguins is a flute-driven, carefully-crafted piece of work that never loses its goal: to represent the harshness of the Antarctic land and to make us care for those imperial figures herded by centuries-old instincts. At times rhythmic, at times gleaming, the music skips over the facile terrain of airy synths and dives into a fleshed-out style of crystalline piano and ominous bass chords, marching to the sound of world percussion and melodic restraint.