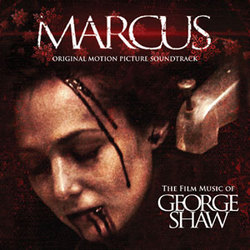 Jerry Goldsmith is perhaps the finest example of a composer who rose above the material. Even when the films he scored were stinkers, he managed to whip out great action music and robust melodies that have since outlived the movies for which they were written. MovieScore Media's latest release, Marcus: The Film Music of George Shaw, reminds me of that. It showcases the talents of a young composer who is decidedly "old school" (and I mean it as a compliment), and the low-budget student films these scores were plucked from do seem a tad... stinky? It's a funny experience to watch clips and trailers from some of these films on Shaw's myspace and compare them to the quality of the music offered on this CD. The scores were all composed for much better, more glamorous versions of the movies which ended up being recorded on digital media. The soundtrack release features twenty minutes worth of Shaw's score to Marcus and another twenty minutes showcasing cues and suites from other films he has scored.

Marcus takes place during the holidays as one man tries to reconcile with his sister while the sister's boyfriend also shows up and turns the Christmas night into one of psychological terrors and bloody violence. Most of the cues Shaw wrote for the film are fairly restrained and establish a mood of unease with dark synthesizers ("Stabbed in the Neck") and string harmonies ("Brooke Comes To"). It's the "Main Titles," however, which catapult the score above the droning suspense with a clever and memorable theme which stayed with me for days after listening to the album for the first time. It is first stated by the glockenspiel over a quiet ascending piano line in triple meter. Its second phrase vaguely alludes to Hedwig's theme from Harry Potter but it's a far more tragic melody, especially when the strings flesh it out at the end of the sequence. This "old school" vibe Shaw's music gives out is resplendent when he quotes the theme in "Brooke, I'm Home." The melody is carried by the flute, the piano accompaniment is taken over by the harp, and the sound is distinctly Goldsmithian: it reminded me of Nell's thematic material from Goldsmith's The Haunting. However, the real thematic pay-off is in the final track of the score, "Carol of Death," which is the highlight of the release. Shaw begins with a live rendition of the traditional "Carol of the Bells" and soon overlays his main theme for violins which is in perfect harmony with the carol itself. The violins accompanied by the trumpets then take over the carol, which becomes a dynamic ostinato over which the trombones play the main theme. The brass, strings, woodwinds, and glockenspiel succeed each other in carrying the carol and the main theme over short bursts from the snare drum, creating a great, ingenious finale that recalls some of the best moments in Williams' and Goldsmith's careers.

A highly reverberated tin whistle plucks us out of the Christmas gloom to introduce us to Shaw's thematic material from The Loch Ness Monster, which also uses a bassoon and a small string ensemble. His string writing is always mature and approachable and the fact that virtually every orchestral part written by the composer is recorded live helps sell the music tremendously. Indeed, apart from Shaw's writing talent, the most impressive feat on display here is his mantra to always forgo sampled instruments in favor of live performances, even if it means calling a few favors and overdubbing a string quartet many times to get the resonance of a string ensemble. Synthesizers are only used to provide alienating sounds, such as in "Revengers: Suite," where they provide a dark mood over a synth choir and powerful drumming. This means the cello in "Chandler Hall: In Serious Trouble" is a live performance, which is necessary if it is to sell the emotions of the piece. The string ensemble which takes over from the cello and over which an electric piano plays may sound a bit on the small side, as it is an overdub, but at least the sound is real and nuanced and the composer is to be commended for that.

The cues and suites that follow Marcus run the gamut from Celtic music ("The Loch Ness Monster") to marimba-driven Newmanesque documentary music ("Spew: Epilogue"); from queasy Alien-inspired string suspense ("Under Pressure: A Bad Man Did a Terrible Thing") to empowering martial arts quest music for exotic flutes, taiko drums, and orchestra ("Revengers: Suite"); from touching personal music for drug dealings gone wrong ("Chandler Hall: In Serious Trouble") to visceral orchestral horror ("The Taking: End Credits"). The harmonic writing for the strings is especially mature and, once again, Goldsmithian and it is noteworthy mainly because writing for strings can easily be handled in an overbearing and childish manner by young composers.

Marcus: The Film Music of George Shaw introduced me to yet another strong, up-and-coming composer in Hollywood with a voice harking back to the Silver Age of film scoring. It has solid orchestrations, great themes, and enough originality as to be noticeable. Having had the chance to listen to a more extensive demo CD from Shaw's early career, I can say that the music of Marcus is no fluke: the talent on display is genuine. Shaw's music seems to transcend the material in both writing and sound quality and I cannot wait to hear how a proper budget and a decent motion picture might guide his composing pen in the future.