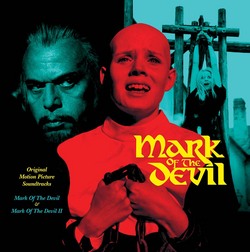 Mark of the Devil I & II

Original Motion Picture Soundtracks to Mark of the Devil in the original mono recording from 1970 and Mark of the Devil II from 1973 composed & performed by Michael Holm with additional music from Don Banks, John Scott, Eddie Warner, Sam Sklair & Tony Tape.

All versions come with extensive and exclusive liner notes from: Michael Holm, Udo Kier, and more.