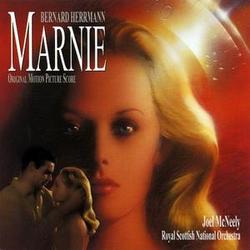 Every time Joel McNeely and the Royal Scottish National Orchestra record a Bernard Herrmann score, it's as though Herrmann himself were in the room guiding McNeely's baton. Time and time again, the quality of the performances is top-notch, and Marnie is no exception. Marnie is a typical Hitchcock film involving a woman (Marnie, played by Tippi Hedren) who is a habitual thief that also has serious psychological problems (no big stretch for Hitchcock!).

The score is classic Herrmann, starting with a sweeping dramatic string section playing the main theme, with plenty of horns to accompany. The use of a harp to add subtle flourishes on top of the chords is delightful, and it's a theme that is so solid that I realized I knew it even though it had been years since I've seen the film.

Like many Herrmann scores, the cues tend to be short - on average about one-minute long. The main theme shows up many times in the various cues, with a few variations. But that's not the only theme. "The Hunt" has a more upbeat action-oriented motif, and the love theme heard in "Romance" is a calm intimate one.

The album runs 50-minutes over 41 tracks, and due to the minimal amount of variations and themes, one might find that the album is repetitive to listen to. I think that Marnie might be better served (as listening experiences go) as a shorter 20-minute suite as part of a larger compilation album. But in so far as this is a one-film score album, it's nice to have all of the music for archival purposes. As most Herrmann scores go, almost all of the tracks are objects ("The Bowl", "The Drawer", "The Checkbook", etc.) and the music fits in snugly with the other Hitchcock scores he's written. It's a worthy addition to any Herrmann collection.