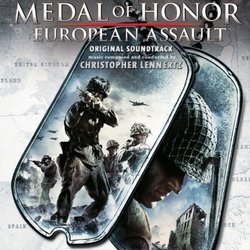 Michael Giacchino's Medal of Honor scores elevated the quality of game scores to the level of film music. The music took on the patriotic feel of military scores in the wake of John Williams' Saving Private Ryan, and why wouldn't it when it was created by Steven Spielberg? This style of war-scoring continued to cut out a genre with further Medal of Honor games, Michael Kamen's Band of Brothers, and most recently, Trevor Rabin's The Great Raid. After a few Medal of Honor games, Giacchino handed the reigns to Christopher Lennertz, whose first crack at the series for Rising Sun (aka Pacific Assault) resulted in a good mix of the above-mentioned patriotic brass sound with Japanese-influenced instrumentation. Lennertz's score pushed the Medal of Honor series in a new direction, musically, while maintaining the style of Giacchino's own work.

Lennertz's main theme for both Pacific and European Assault is similar to Giacchino's, but has its own feel as well. The new iTunes exclusive album release of Medal of Honor: European Assault opens with a quiet brass quartet version of the theme in "Dogs of War" which builds nicely into the powerful theme with the full brass and choir driven orchestra. Unlike large parts of Rising Sun (also available as an iTunes exclusive download), the majority of European Assault is dominated by the brass, with some quieter string solos interspersed ("Casualties of War"). Some cues are more frenetic than the action cues from the earlier Medal of Honor installments ("Operation Chariot").

However, apart from the widely used main theme, European Assault is not up to par with Giacchino's works or Lennertz's Pacific Assault. The album is about a half hour long and meanders through the action parts without really going in any real direction. The music is great on the surface with a bold brassy theme, but it lacks the emotion or technique of cues like "Hymn to Brother's Lost" from Pacific Assault. This score works quite well in the game, but we have a high standard to compare it to and it doesn't quite make it. I do, however, look forward to Lennertz's future work on this series.