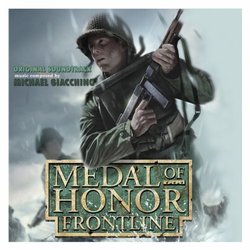 Michael Giacchino is a composer who hasn't hit it big in mainstream quite yet.  His publicly released albums have been fully-orchestrated scores to video games thus far, including "The Lost World: Jurassic Park" and the critically acclaimed scores to "Medal of Honor" and its semi-sequel, "Medal of Honor: Underground."  Giacchino is back in form with his score to the newest Playstation 2 game, "Medal of Honor: Frontline".  As performed by the Northwest Sinfonia under the baton of Tim Simonec, "MOH: Frontline" is a magnificent triumph, a score highlighting the agony of fighting during the Second World War, and also including quick-paced action cues and high-tension espionage.

The main theme to MOH is found in the first track, "Operation Market Garden."  This time the MOH theme returns slightly altered, with a lone voice emerging through the swirling of the strings and the blaring of the trumpets.  It is very Williams-esque in sound and nature. In fact, most of this score sounds like a mix between Danny Elfman and John Williams.  In the faster-paced action cues ("Manor House Rally", "The Halftrack Chase", "Emmerich Station") you can almost Elfman's trademark ringing of the bells, the rising of the strings, such as what Elfman used in Batman. Very cool.

For the most part, the CD tends to sticks with the drama.  The score underlines the somberness and anguish a solider would face during the war. The best example comes to light in "After the Drop."  The level is about three soldiers' trek across a countryside teeming with Nazi filth hiding amongst the ancient homes and windmills.  The track is highlighted by a chorus, which was chilling, as it brought a small tear to my eye.

The sound quality is very high, and props must be given to EA Games for releasing this score on CD.  Having the album in my bass-filled CD player brought my entire block to life.  The bass is rich and vibrant, so be sure to tune your equalizer for maximum enjoyment.  If you aren't careful, you might catch yourself humming right along with the tunes during the second listen.

As mentioned before, when John Williams finally passes the torch, that torch should be passed to Giacchino.  Spielberg said it himself, that Giacchino was a "young Williams".  It would be amazing to hear Giacchino's ideas for Spielberg's next flick, Catch Me If You Can, or better yet, maybe Giacchino could be given the heads-up for the next Star Wars movie. Giacchino is the type of young man that musical scores have been aching for in quite some time.  His work from here can only get better and better.