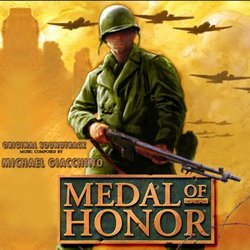 Medal of Honor is a computer game. A computer game with an amazing score. Composer Michael Giacchino, who previously provided a fully orchestral score to The Lost World: Jurassic Park video game now provides an amazing underscore to Medal of Honor. This game is inspired by Saving Private Ryan and was created by Steven Spielberg. The end result is a score that should be used for a feature film that is very heavy in the John Williams sound, and is one of the better scores I've heard in a long time.

Michael approached the score by coming up with some great themes. The first major theme (very "Hymn To The Fallen"-esque) is featured as the main title track: "Medal of Honor". From there, it becomes a very dramatic score. With enough tension to go around, many of the cues would be perfect for a World War II action film. I can't seem to stress enough the amazement that this was all done for a computer game. As one could imagine, it doesn't necessarily fit the interactivity of the game, but it's the tone and textures that are weaved that allows this to work. Giacchino takes full advantage of the 65-piece orchestra, and the recording is very high quality.

A nice bonus to the album are two hidden tracks. The first is what sounds like audio directly from the game, giving us a taste of how the score is integrated in to gameplay. German shouting, atmosphere, explosions, and of course the music are all here in wonderful mono. The other bonus, which had me smiling with glee, is Michael's mother conducting the orchestra in the National Anthem. You have to hear it to believe it.

With plenty of dramatic themes (including a great one for the Nazis) that show up throughout the album, this is definitely not one to be missed. Spielberg referred to Giacchino as a "young John Williams", and one can take heart that if Williams ever (gasp!) decided to pass on one of Steven's projects, Michael would probably be there to provide us with the score we all would be yearning for. It is satisfying to know if Giacchino can write an exceptional score for a computer game, then his film projects will certainly blow us away.

This cd is available exclusively from Amazon.com, and can be purchased from the link on the left.
more reviews by Dan Goldwasser