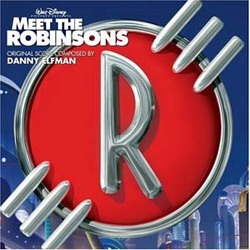 What a bizarre little score. I really feel as though I could stop my review right there, and you would know everything you need to know about Danny Elfman\'s latest project. At times touching, times hilarious, times zany, and times downright weird, Meet the Robinsons is the love child of Pee-Wee\'s Big Adventure, Mars Attacks, Flubber, Charlie and the Chocolate Factory, Charlotte\'s Web, and The Family Man. It careens among these styles with abandon, yet somehow creates uniformity among its diversity.

Danny Elfman has never written for traditional (2D or 3D) animation before now. Strike you as odd? His musical style has always seemed suited for the genre, but the closest he\'s ever come before was with the one-two punch of the stop-motion Nightmare Before Christmas and Corpse Bride. Elfman remarked that "I\'ve always somewhat avoided animation because the music can get kind of silly and spoofy, but Meet the Robinsons not only struck me as very creative and crazy in the best sense, but also as very emotional." Interesting choice of words, "silly" and "spoofy," because in many ways, Elfman\'s score ultimately is "spoofy," taking on a variety of styles and marshalling them to fit the onscreen action.

The movie in question is Disney\'s latest animated feature. Based on the book A Day with Wilbur Robinson by William Joyce, Meet the Robinsons follows the adventures of a young time-traveling orphan named Lewis who is taken to 2037 by Wilbur Robinson, where Lewis tries to find his family. The Disney animators have imagined a future with, since the main character jumps through time, a firm grasp of the past – particularly 1920s deco style. It\'s a visual melding of styles that Elfman matches note for note in his score.

In crafting his score, Elfman noted that "They [the characters] zip around in that classic Golden Age of animation style, so I\'d pick a character\'s movement and just follow them with the music, go right with what they were doing." As a result, individual cues have a schizophrenic nature. Take "Pop Quiz and the Time Machine Montage," for example. It opens with bass and trap set laying down a rhythmic groove over which a Hammond organ plays a repeating motive. The organ is punctuated by choral "ahs" and muted trumpets. The jazzy interplay among the various elements is delightful and swinging, but it only lasts about 45 seconds. The chorus then modulates into a "la-la" rendition of Elfman\'s song contribution, "The Future has Arrived," a paradoxical statement given jaunty life by Elfman\'s music. It is as straight at the preceding section was swinging. But after another 30 seconds, we switch into sinister music given a futuristic edge by the Theremin, that marker of all 1950s Sci-Fi movies, for only a brief moment before a samba feel takes over, complete with bongos. By the last minute of this brief, 3 and 3/4 minute cue, we\'ve retreated back to a light jazz swing feel with vibraphone and muted brass before ending with the Theremin again, just to remind us that things aren\'t totally right.

I usually despise giving that kind of play-by-play description, feeling an explanation of the overall mood is more beneficial, but in this case the description only hints at the exhaustion of styles Elfman uses in the score. There\'s "The Prologue\'s\'\' sweet, lilting theme for young Lewis, unstuck in time, that recurs in touching arrangements in "A Family United" and "Setting Things Right; the power pop of "To the Future!" that refuses to get out of your head after one hearing; the traditional Elfman dark strings and chorus building to climax in "Goob\'s Story;" and even cartoon antics in "The Science Fair." The result is so overwhelming that you either give into it and laugh at the audacity or shake your head trying to make sense of it all.

Added to Elfman\'s score are the songs, which comprise fully half the CD. Elfman\'s score song is given full life in "The Future has Arrived" by The All-American Rejects; Rufus Wainwright contributes three original songs that really form the movie\'s heart by hitting the emotional core of Lewis\'s story; and Rob Thomas and Jaime Cullum round out the eclectic songs with strong contributions. For me, though, the best song is They Might Be Giant\'s cover of "There\'s a Great Big Beautiful Tomorrow" from Disneyworld\'s Carousel of Progress. They give it just the right amount of Broadway pizzazz complete with the warbling soprano behind the Johns.

Overall, Meet the Robinsons is a fascinating listen, but I can\'t give it my complete, unreserved recommendation. The music is fun, lighthearted, and fits the movie\'s mood wonderfully, but it also seems to dwell in excess. Like eating too much candy, Meet the Robinsons is so much, all the time, that it ends up leaving you with a headache.