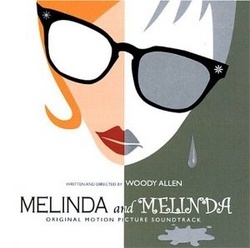 One thing you can't accuse Woody Allen of is having bad taste in music. You know he must have a huge jazz and blues collection. I myself picture hundreds of LPS gathered around some New York loft which he just pulls out while writing his one movie per year, letting whatever he is listening to inspire him. This is all speculation of course, but it feels appropriate. Melinda and Melinda is his movie for 2005; half comedy/half-tragedy which has been getting notice for the fact that Will Ferrell plays the traditional Woody character. Musically it isn't really different from what he has been doing for the past 35 years; putting together the best of jazz, blues and classical music

Melinda and Melinda centers around three performers: Duke Ellington ("Take the A Train", "I Let a Song Go Out of My Heart" "In a Mellow Tune"), Erroll Garner ("The Best Things In Life Are Free"," Somebody Stole My Gal" "Will You Still Be Mine?") and Dick Hyman ("Medley - Memories of You / Moonglow / No Moon At All / Darn That Dream", "Love Me", "Don't Get Around Much Anymore"). The album is then rounded out with three classical pieces by Stravinsky ("Concerto in D for String Orchestra: 2. Arioso: Andantino"), Bartok (""String Quartet No. 4") and Bach ("Prelude 2 Well Tempered Clavier" - performed by Dick Hyman).

This is an excellent selection. What is impressive about the soundtrack is that the sequencing of the pieces is excellent.  The album jumps around between the different artists, creating a nice varying flow from one track to the next ("Take the A Train" starts with energy to slow down "The Best Things In Life Are Free", then to pick it back up a little with "Somebody Stole My Gal" and so on). The songs never clump together in one section with the intelligent exception of putting the classical pieces in the center of the album as a somber midway point before it picks back up for the final few tracks of the album.

This is a mellow evening album, perfect evening album for relaxing, eating good food, drinking copious amounts of wine and pretending you're a lot more sophisticated than you really are.