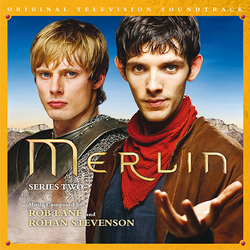 The album features a carefully assembled selection from the second series composed by the Emmy-nominated Rob Lane (John Adams) and Rohan Stevenson.

Epic, exciting, romantic, spell-binding and magical music that takes the great standard of the first series of Merlin to an even higher level!