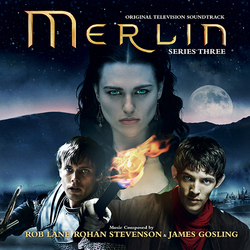 Due to public demand, MovieScore Media follows up our two previous Merlin soundtracks from the first two seasons of the series with music from the third and fourth series.

The composers from the previous two return in exquisite form. For Merlin, Rob Lane, Rohan Stevenson and James Gosling have composed some of the most epic music written for the television medium in recent years.

The entertaining score album for Series Three has been meticulously sequenced to make for a great listening experience that highlights the best of the music, and the composers have taken into special account requests from fans of the series when the album was put together. Beautiful themes, swashbuckling action music, dark and mesmerizing suspense scoring, quirky scherzos—all painted on an epic canvas featuring orchestra and choir.