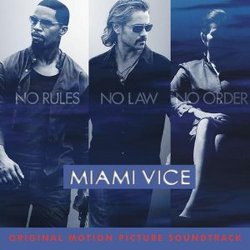 I normally have very little interest in compilation song soundtracks, with a few exceptions, such as Daredevil. However, Miami Vice does not fall under the category of "Music Inspired by the Film" since Michael Mann's film used most of the songs on the soundtrack in the film itself.

The small amount of score in the film, which includes cues by both John Murphy and Klaus Badelt, is also represented on the album, making for an accurate soundtrack to the film. However, the question remains as to whether the song selection is right for the film. The soundtrack tries hard to be both edgy and Latin, but this gives it an eclectic feel that makes it sound like a random selection of songs rather than the soundtrack to a single film.

Most noticeable is the lack of the Linkin Park/Jay-Z song "Numb/Encore" that was used in the trailers and also the beginning of the film. However, the idea of this song was used quite a bit in the rest of the song selection. This collection is comprised of a number of remixes, re-recordings, or mainly instrumental songs that took the place of a film score. I am not saying that the film should have used Jan Hammer's "Miami Vice" theme, but some unifying music could have helped the film.

Instrumental tracks by groups such as Mogwai, Moby, and Freaky Chakra do not work the same as a score. A number of other songs are remixes that contain bits of previously recorded songs or are instrumental with some amount of vocals, such as those by Blue Foundation, King Britt, and Nina Simone.

At least in Daredevil, the songs were a consistant genre. Some of the Miami Vice songs fit the feel of the film, such as the new cover of Phil Collins' "In the Air Tonight," by Nonpoint, which adds percussion and electric guitars to the song for a harsher feel. Emilio Estefan's rerecording of Mandy Moore's "In My Pocket" is the only song that succeeds at mixing the edgy feel with the Latin-set film.

The three score tracks by different composers (John Murphy, Klaus Badelt and Mark Baston) are little different from the instrumental rock songs and changing the composer of a film for different scenes is not the best way to create a consistent sound for the film. I think the soundtrack release is a good representation of the music from Miami Vice, and fans of that will be happy with this album. However, I think the song selection tended to take the place of a score and made the film sound like an episode of CSI: Miami rather than a large budget feature film.