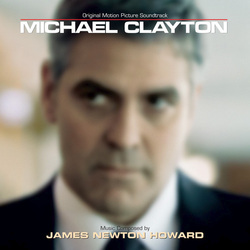 If one word could be used to describe James Newton Howard\'s score for Michael Clayton, "ethereal" comes to mind. It is a very free and open score. A good chunk of it is electronic in nature with the other half being somewhat traditional orchestration. Unlike some scores, this is a benefit one can easily get lost in this score listening to all the textures Howard places in the score. Michael Clayton is about a lawyer\'s decision to redeem himself for past wrongs and come to terms with where his life has headed. Howard prepares the listeners for the journey this dark drama will take from the outset.

The opening track, "Main Titles," though vague as it may be for a track label, summarizes the whole of the film, including the explosion of the protagonist\'s vehicle, which Howard foreshadows with a click, click rhythm with in the track. This foreshadowing, along with a few key pieces, gives a well rounded idea of just what Michael Clayton is about. "Chinatown" and "Driving to the Field" are but two examples of Howard\'s mastering style to portray a very dark, heavy existence for the character. His musical portrait of the masterminding company U North, in the aptly titled piece, "U North," is dark and impersonal with its beginning set off with the ominous thump of a gran cassa. It’s very steady throughout the piece with rising strings coming through the dense thud and slowly fading out to be replaced by more percussion. Howard effectively creates the sensation of the music washing over you.

Two pieces of significant mention are in the latter half of the score. "I\'m Not the Guy You Kill" and "25 Dollars Worth," are the two longest tracks of the score, giving Howard room to expand and play with the emotion of the music. "I\'m Not the Guy You Kill" is very heavy from the start, allowing Clayton to be humanized with a short figure from the violins, but also shows the opposite of his character with the hammered low octave notes and rushing percussion. Towards the three-quarters mark he changes pace drastically from the slow meter in the prior material presented to a much faster tempo. In doing so he brings in various motifs used in other tracks, adding density and texture before finally building up to an ear crushing climax to round it out.

"25 Dollars Worth," is as soft as it is tough. Listeners are introduced to the track with a very slow piano melody that gains momentum when chordal shapes are added in the mix. As it fades out there is a minor pause and slowly the middle and low strings start to play a imitation of the statement piano made, and slowly half way though the track high strings come in with a tender melodic figure before fading out to be replaced by light bells and a more percussive rhythms that sums up the score. This track is a perfect fit for the end of an already ethereal score.

Though the score for Michael Clayton isn\'t something most casual listeners of Howard may gravitate towards, they will be missing out if they don\'t purchase it, as it shows the diversity within Howard\'s arsenal.