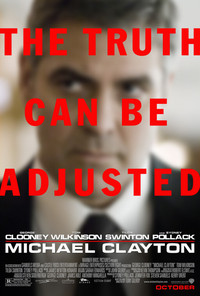 In Michael Clayton, George Clooney plays the title role, an elite NY attorney who works for the prestigious law firm of Kenner, Bach & Ledeen, \"cleaning up\" for their clients. When KB&L attorney Arthur Edens (Tom Wilkinson) sabotages a high profile class action lawsuit in which he is defending the multinational corporation U/North by having a mental breakdown, Clayton is called in to help fix the situation. At the same time, U/North\'s general counsel (Tilda Swinton) is doing everything she can to ensure the mess gets cleaned up - at any cost. When she and Clayton start working against each other, things start to get really tense.

Michael Clayton is very similar to Erin Brockovich, but from a different angle. Written and directed by Tony Gilroy (who wrote the Jason Bourne films), the film\'s toughest challenge is convincing us that a sleazy lawyer like Clayton is supposed to be likable. He\'s divorced, has a son he doesn\'t connect with much, an estranged drug-addicted brother, and is in debt from a failed restaurant venutre and gambling habits. So in essence, he\'s trapped at KB&L because he has nothing else, and so he begrudgingly does their dirty work for them. Clooney ends up being sympathetic, which is no small achievement, and Swinton does an excellent job as the corporate lawyer who slowly digs her own grave. Yet it is Tom Wilkinson\'s portrayal of an insane man who has found redemption that truly stands out.

The film has a few moments of excitement, but for the most part, it is a talking film. The theme of corporate greed at the public\'s expense is familiar, but we can all relate to it. It\'s still very hard to relate to lawyers, let alone feel sympathy for them, and at times it seems like the film is trying a little too hard, through scenes of Clayton\'s ex-wife, and dysfunctional family life. It might add to the depth of the character, but it felt a little too forced.

The score by James Newton Howard works effectively, providing tension when needed, but otherwise remains low key throughout. It\'s unremarkable, but appropriate for the film. Similarly, Robert Elswit\'s dreary and bleak cinematography makes everything feel cold and lacking humanity - fitting for a film about lawyers. Michael Clayton was interesting to watch for the character portrayals, but ultimately might work better as a DVD rental than something to rush out and see in theaters.