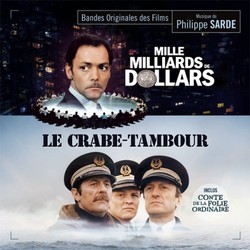 Music Box Records continues their collaboration with Philippe Sarde on the archaeology of his work for cinema through this edition of three new scores never released on CD before. For Mille milliards de dollars, Sarde chose to use four pianos and a viola to mention the activities of the multinational corporations. In Contre de la folie ordinaire, the composer used a guitar and the London Symphony Orchestra for a score filled with an authentic Spanish flavor. Finally, the daring score of Le Crabe-tambour mixed symphonic orchestra, Vietnamese monochord zither and hunting horn in order to emphasize this strange and philosophical quest for a man.

The program has been assembled, produced and supervised by Philippe Sarde and Dominique Spagnolo. This present edition features the same content as the original vinyl presentations for Mille milliards de dollars and Conte de la folie ordinaire. The expanded score for Le Crabe-tambour has been fully remastered from the original session tapes and includes previously unreleased tracks. The CD comes with a 12-page booklet with liner notes by Gérard Dastugue, discussing the films and the scores including new comments by Philippe Sarde on his collaboration with the three directors.