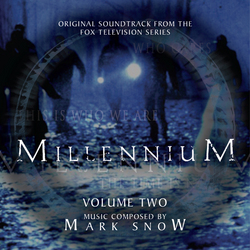 Haunting, soulful, terrifying and beautiful, Mr. Snow's complex musical tapestry for this landmark show is an immersive experience to be treasured. This 2-CD presentation is a further exploration into the series' most impressive musical moments—the perfect complement to the first volume of the show's music (which has just been re-issued).

Produced by Mark Snow, Nick Redman and Mike Joffe, and mastered by James Nelson, this new compilation of original tracks is limited to 2000 units and features exclusive, in-depth liner notes from writer Randall D. Larson, (which include interview comments from the composer, writer producers Frank Spotnitz and Chip Johannessen and music editor Jeff Charbonneau—as well as a forward quote from Lance Henriksen). Hauntingly soulful art design is by Mark Banning.