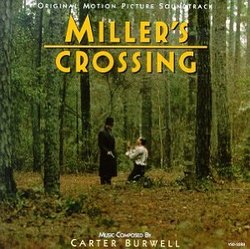 Carter Burwell always seems to catch me off guard, as do the Coen Brothers. The commercial release for Raising Arizona was, to be kind, not very good. And then, all of sudden, only three years later, he composes some of the most endearing, memorable, and highly enjoyable music. Miller's Crossing, while not the pinnacle of Burwell's career, is definitely one of his more epic and profound compositions.

The film, set in Ireland, revolves around an Irish mob boss and his right hand man, who find themselves in a bit of trouble. Burwell, through the use of the oboe and flute, leaves shades of Ireland in his composition. This is most prominent in the opening track, as we are introduced to the main theme surrounding the whole score. The theme is absolutely astounding, gentle, sweeping, emotional, and above all, moving. It is some the most stirring music that I have ever encountered in the realms of film music. It has that certain "Burwell-esque" quality about it. Burwell has a definite style that he has masterfully honed and worked at, which is apparent throughout this score. The trained ear would be able to discern this from, say, James Horner. In fact, many would say that this is right up there with the likes Horner. I disagree. This is far better than Horner, and the likes thereof.

In a way, Miller's Crossing, while meeting with a rather tepid box-office, solidified Ethan and Joel Coen as serious writers/directors in Hollywood. The same can be said of Carter Burwell and his role as a composer/conductor in Hollywood. In a phenomenal way, he has solidified himself as a musical force to be reckoned with. Sprinkled with a few lively songs, and a wonderful version of "O Danny Boy", Miller's Crossing is a must-have, for both the Burwell fan, and the non-Burwell fan alike.