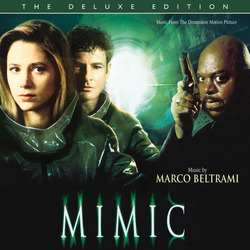 Widely considered to be one of Marco Beltrami's very best scores, we are thrilled to announce Mimic: The Deluxe Edition to coincide with the just-released Blu-ray of the film. Greatly expanded from our own original release from 1997, Mimic has never sounded better.

From acclaimed director Guillermo Del Toro (Pan's Labyrnth, Hellboy) comes "a terrifying film of great elegance" (San Francisco Chronicle). Starring Academy Award® winner Mira Sorvino (Mighty Aphrodite) and screen favorite Charles S. Dutton (A Time to Kill) and Josh Brolin (True Grit) this electrifying thriller brings the epic battle between man and nature to life when a team of scientists discover a glitch in their miracle cure. With the power to mimic and destroy its every predator and the threat of an entire city's destruction, their creation has taken on a horrifying life of its own. With the weight of extinction on their shoulders the team is forced to take matters into their own hands in this stylish hit that delivers heart pounding thrills from beginning to end.