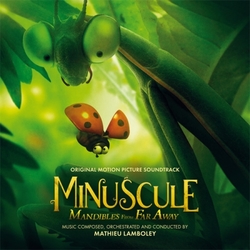 Minuscule: Mandibles from Far Away

In collaboration with Futurikon Films, Music Box Records proudly presents on CD the original motion picture soundtrack of the animated film Minuscule: Mandibles from Far Away (2019) composed, orchestrated and conducted by Mathieu Lamboley.

Minuscule: Mandibles from Far Away (in French theaters in January 30, 2019), co-written and directed by Hélčne Giraud and Thomas Szabo, shares the same creative universe as the successful Minuscule series created in 2006. The first feature film titled Minuscule: Valley of the Lost Ants (2014) was a huge hit in France and won the France's César Award for Best Animated Feature Film at the 40th César Awards.

Mathieu Lamboley provides an exciting and lyrical orchestral score with choir, displaying a wide array of wondrous melodic themes. There are echoes of classical music (Ravel, Prokofiev) and contemporary film music writing (John Williams, Michael Giacchino), handled by the composer in his own personal orchestral style.

The stirring and lavish orchestral score has been recorded by the Orchestre National d'Île-de-France and the Children Choir of Francis Bardot conducted by Mathieu Lamboley.