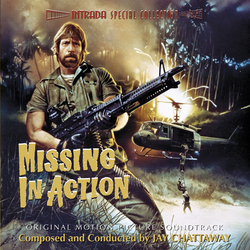 Chattaway has unique scoring method, creates lengthy rhythm foundations & sustained ideas, then writes multiple layers of melodic & harmonic material above that can be mixed together or used as separate ideas onto themselves. Other times sparse foundations simply play alone. Stark, dramatic scoring!

Numerous layers of orchestra & electronics were recorded separately and even though masters had been handled a lot, tracked into other productions, stored in multiple locations and showed the signs of wear, happily all individual layers survived intact for our CD. Ironically, all 24-track elements were mixed down to mono and preserved in that format only (as was film itself) so our CD features complete 74-minute score in mono. That said, several cues were re-mixed into multi-track stereo in 1984 for re-use in subsequent features and will appear on upcoming stereo CD of Chattaway's complete Braddock: Missing In Action III soundtrack. So collect 'em all! Jay Chattaway conducts.