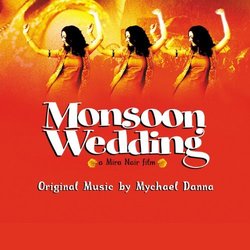 Monsoon Wedding, a film directed by Mira Nair, is a beautifully told story about a modern Punjabi family dealing with the collision of modern sensibilities and traditional customs in India.  Westernization pervades every element of life, but traditions and basic family needs are still there, and this conflict is where the rich drama, comedy and, most importantly, romance, lies.  Composer Mychael Danna does a good job of complementing this strong work with a diverse and energetic soundtrack.

This film tells of a modern Indian woman coping with the mysteries of arranged marriage and the trouble of a not-quite-ended affair with a news anchor.  Family intrigue and secondary love affairs surround this central love affair, making for an elaborate web of a story that is compelling and never really confusing, despite the rush of new cultural cues.  On top of that, Monsoon Wedding gives a Western audience a very detailed look at modern Indian life and culture.  The story is energetic but remains soulful, mainly by being willing to mix the happy with the sad; you know how high the peaks are by having trekked through the valleys too.

Danna did the music for Nair's previous film, Kama Sutra, and clearly understands Nair's intentions.  The music enhances both the emotions and the atmosphere of the work.  When one sees the film, he or she comes away thinking how energetic and exciting it is, but when one listens to the soundtrack, including remix of the classic Indian tune "Aaja Savariya," they realize how often dark and melancholy the soundtrack is.  Danna was smart to not make it one long string of upbeat tunes, as that would be both tiring and emotionally vacant.  There is a solid mix of dance-able, fun tracks and more sobering ones.  The main theme, "Today my hear desires," is downright menacing in places.  Even without the film, the rich array of modern and classic Indian artist conjures India in a truly enticing way.

There aren't many negatives to say about the soundtrack, except perhaps that it is not a very unified work.  It is more of a collection of various good Indian pieces than a coherent centralized work.  If you are big on themes and motifs, there is some of that here, but not a lot of it.   I strongly recommend the soundtrack for folks who like the film and want to recall some of the more exciting dance numbers, as well as for people interested in traditional Indian music with a slightly modern twist.  If multicultural music is not your thing, you may want to forego this one.  Overall, an enthusiastic thumbs up for Mychael Danna's Monsoon Wedding soundtrack.