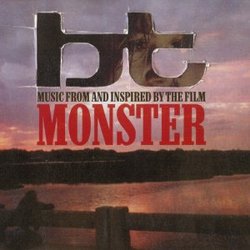 Often when an Actress wins an Oscar it is because she is in vogue or did a "brave
performance" (meaning they did it without makeup), or they unfairly lost
the award previously to another actress who was "in vogue" and are
being compensated for it. But Charlize Theron's portrayal of Florida
serial-killer Aileen Wuornos is very worthy of recognition as is everything
else about Monster, one of the best films of 2003. Patty Jenkins'
surprisingly even handed portrayal Aileen's tragic love affair/crime spree is
handled with restraint and humanity. More surprisingly is her off-beat choice
of LA based DJ and British electronica superstar BT as composer. While BT
composed scores to such films as Go, Fast and the Furious and Driven,
Monster shows a true evolution of his music skills and suggests we will be
seeing a lot more from him in the future.

Like fellow musician-turned-composer Cliff Martinez, BT uses an intimate
mixture of spare instrumentation and ambient tones. Cliff mixes programmed
loops with a southern acoustic instrumentation underscoring the spiritual
emptiness of the humid Florida highways and Aileen's existence. Unique among BT's
musical arsenal is the Ville â Roue (or Hurdy-Gurdy), a 5th-century string
instrument with sustained tones that reverberate for extended periods. It is
performed by Ben Grossman and gives BT's compositions an organic sound very
similar to the haunting work of avant-garde composer Ellen Fullman.

Like a lot of ambient scores, it is awkward to review these scores as they work
much more in context to the film that a soundtrack. This is moody, sober
experience that will be enjoyed by fans of that style while others may be
easily turned off by its atonal nature. If this was a normal CD release of the
score, I would give this maybe a two and a half or three star rating, but as
you see to the left of this review I gave it more than that. Though priced as a
normal CD, this was been released as a 2 disc set (one CD and one DVD).

Since many scores are naturally recorded in 5.1 for theatrical presentation,
there is the simply question of presenting them in an album release. The DVD
contains nine more tracks than the CD adding up to roughly 2 hours of music in
your choice of DTS 5.1 channel sound or PCM 2.0 stereo sound, which the menu
asks you to choose the main screen. The PCM track utilizes the front channels
of the sound system (much like the CD). The DTS track spreads the music over of
all the speakers, giving the music a rich immersive experience. The
compositions are rarely front heavy, and fill the sound space, moving the
oscillating the patterns subtly from speaker to speaker. The Ville â Roue
benefits especially from this treatment.

Included as well are a plethora of extras atypical to a release like this. A
15-minute featurette focuses on director Patty Jenkins and BT discussing the
process of writing the music and the details of several individual cues.
Additionally an interactive audio demo allows you to choice between the dialogue,
sound effects, and music tracks. Wrapping it all up is a trailer to the movie,
linear notes, bios, photo gallery, web links and even a re-mixing contest!
These are the type of extras that music fans look forward to on a multi-disc DVD
special edition of a movie. For it all to be included here is groundbreaking.

All of these features are stellar and set a new standard for a soundtrack album
release. In a time where many music executives complain about massive music
piracy it is albums like this that can bring consumers back with innovative products.
I hope others will follow their lead. This release is a brilliant presentation
of an above average album.