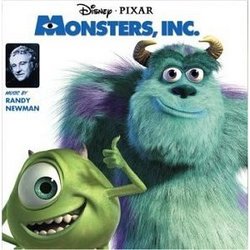 Randy Newman and Pixar seem to go hand in hand these days.  After the phenomenal success of Toy Story, Newman scored A Bug's Life and Toy Story 2 and in the process received awards, nominations, and plenty of acclaim for his work on those films.  Now he's back in the saddle with the latest Pixar/Disney film: Monsters, Inc..  The film's premise is that those monsters in your closet are real - and they're just as scared of you as you are of them.  But they have a job to do - collect children's screams, which help power the big city of Monstropolis.   Sulley (voiced by John Goodman) is a big blue furry creature who is the current board leader for the most screams collected.  His partner, Mike (voiced by Billy Crystal) is basically a walking eyeball and mouth.  After a child comes through to their side of the closet door, and is loose in Monstropolis, it's up to Mike and Sulley to fix things, and in the process not only uncover an evil plan, but also discover themselves along the way.

Newman's score is, dare I say, typical.  There's the perfect amount of incidental underscore, exciting action, and soft emotion present in his work.  The main title, "Monsters, Inc." helps set the general tone - an upbeat big-band swing number that shows up stylistically and thematically throughout the score.  "Walk to Work" and "The Scare Floor" are good examples of the jazzy cues.  "Randall Appears" and "Boo's Adventures in Monstropolis" are other cases where Newman's ability to switch off between styles to match the picture really takes hold.  The orchestration is full and interesting, and very much in the vein of his previous animated efforts.  He's keeping it fresh, but he's still cutting from the same cloth.

Some of the more tender cues, including "Sculley Scares Boo" reminded me just a tad of Alan Silvestri's work in Mousehunt, but it's not so similar that it distracts.  One thing can be said, though - you certainly felt the emotion in those scenes.  Pixar's character animation is top-notch, and the direction is nearly flawless.  In the film's climactic chase through the warehouse, Newman underscores the exciting tension in a five-minute segment riddled with pomp and vigor in "The Ride of the Doors".

As expected, Newman wrote a song for this film.  This one is called "If I Didn't Have You", and it sounds musically like a blend of "You've Got A Friend in Me" from Toy Story and "Bosom Buddies" from the musical Mame.  First performed on the album by Billy Crystal and John Goodman, the song is meaningful and entertaining - and funny.  Crystal and Goodman come up with some clever bits of adlib during the song, and I was terribly disappointed that this song played over the end credits crawl - with no picture.  (The way they were going about it, you would think you would be watching the characters on screen - but no!  Nothing!)  The second performance is by Newman himself, on solo piano, and it's a nice way to cap off the album, even though this version doesn't show up in the film.  Whether you should get this album or not is a no-brainer.  It's nothing groundbreaking or unexpected - it's just high quality work from Randy Newman.  There's even a little bonus sound clip at the end of the album.  Do you really need any other reason to get it?