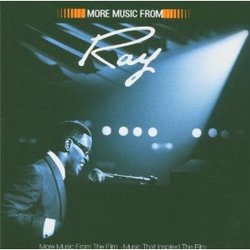 More Music from Ray is pretty self-explanatory. It is an extension of the
first album to the Taylor Hackford bio-musical on Ray Charles.
Though many would not call it a musical, the numbers are genuinely monologs from the man on his state of mind at the time. This soundtrack includes the numbers not on the previous release - and these are not filler tracks that were not worthy of the first album. I'm talking about "Lonely Avenue", "Rockhouse Pt. 1 & 2", "Leave My Woman Alone", "Let's Go Get Stoned", and others. All quality tunes that only further solidify the man's genius.

Additionally, there are three new re-recordings. "Baby Let Me Hold Your Hand", "Every Day I Have the Blues" and "Drown in My Own Tears/You Don't Know Me". "Baby" and "Every Day" needed new live performance of the pieces in order to work in context of the film.  "Baby" includes Slash from Guns 'N Roses on guitar. For "Drown", a new completely new version of this song was created, with Mary-Ann Fisher performing with Charles. All three pieces retain the intimacy of the older tracks. Listening to the album as a whole, there is a universal quality of Charles' voice throughout his career. These songs were recorded within a year of his death and there's no loss of vitality in his voice. If he was still alive, he'd still be touring and belting these numbers out.

One nice bonus is a DVD including pieces of O-Genio's Ray Charles 1963 Live in Brazil, containing Charles performing "Don't Set Me Free" and "Carry Me Back to Old Virginny." It is only 9 minutes of footage, but it is always nice to get little extra treats like this.